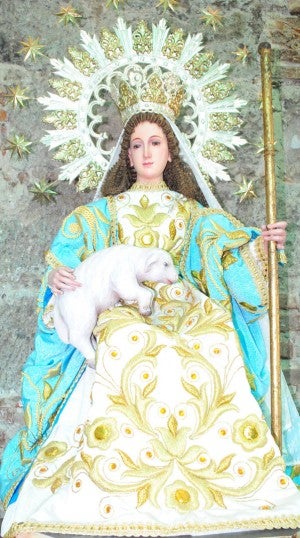 DIVINA PASTORA. The image of the La Virgen Divina Pastora (Divine Shepherdess) was canonically crowned 50 years ago as the patroness of the Diocese of Cabanatuan and of the Three Kings Parish in Gapan City, Nueva Ecija province. ANSELMO ROQUE/INQUIRER CENTRAL LUZON

A combination of religious attractions, some dating back to the 16th century, makes Gapan City the top pilgrimage site in Central Luzon.

The antique image of La Virgen Divina Pastora, also called Divina Pastora or the Divine Shepherdess, commands the wider attention of the Catholic faithful. It is not only the patroness of Gapan City but also of the Diocese of Cabanatuan and Nueva Ecija province.

The 50th anniversary of the canonical coronation of Inang Divina and the 28th anniversary of the declaration of the national shrine of the La Virgen Divina Pastora will be celebrated on April 26, said Fr. Antonio Mangahas Jr., rector and parish priest of the Three Kings Parish in Gapan.

Bishop Sofronio Bancud of the Diocese of Cabanatuan will lead a concelebrated Mass at 2 p.m. Lingayen-Dagupan Archbishop Socrates Villegas will deliver the homily and preside over the reenactment of the canonical coronation.

A grand procession for Inang Divina follows after the church rites.

Then called Ibon, this southern Nueva Ecija city was established as the Three Kings Parish in 1595, when friars founded it as a town of Pampanga province.

The parish extended up to the Sierra Madre mountain ranges in the east, San Miguel town in Bulacan province in the south, Candaba town in Pampanga in the west, and Cabanatuan in the north.

Gapan is thus the oldest Catholic parish in Nueva Ecija and one of the oldest in the country.

Built in the mid-1800s, Gapan’s brick-and-adobe church features a mural of the Holy Trinity on the ceiling above the altar. Its belfry houses four huge bells whose pealing at different times of the day in the olden days reminded the community of various activities.

The bells were also tolled for special occasions and emergencies, such as when a fire broke out.

On the death of a parishioner, the bells’ high pitch indicated the dead was a woman and the the low pitch, a man.

Parishioners have attributed several miracles and answered prayers to the wooden image, which stands 1.5 meters.

“They include petitions granted, dreams realized and broken relationships restored. They were attributed by the supplicants to the loving intercession of Inang Divina,” Mangahas said.

All year through, Catholics from Nueva Ecija and other Central Luzon provinces come to pray to the image of the Virgin Mary, which is permanently enthroned in the church.

“Our Divina Pastora is probably the lesser-known image in the lineup of Marian devotions in the country. However, we take pride that its stature is unique,” Mangahas said.

Citing historical records, Mangahas said the La Virgen Divina Pastora was canonically crowned and declared the patroness of the Diocese of Cabanatuan on April 26, 1964, through a decree by Pope Paul VI.

On April 26, 1986, the church was declared the national shrine of La Virgen Divina Pastora by the Catholic Bishops’ Conference of the Philippines.

The Virgin’s left hand holds a cane, or staff, while her right hand appears to be petting a sheep resting on her lap.

The image was originally owned by the Valmonte family, according to one of two versions of the story detailing how the Divina Pastora became a patron saint.

“Per our clan’s account, the image came from Spain,” said Ramon Valmonte, a local journalist. “It was kept in the house of Juana de la Cruz Valmonte, who was then a kapitana (village chief) of a place called Callos, a village of Ibon, the original name of Gapan,” he said.

He said Juana learned more about the image, which was then popular as a religious icon in Spain and in Venezuela.

Valmonte said Juana consulted an Augustinian priest whom she approached in Manila to interpret a dream that depicted the Virgin Mary as the divine shepherdess (Divina Pastora).

He said the priest counseled her to get an image of La Virgen Divina Pastora.

Another version of the image’s origins claims that an Augustinian priest brought the image to the wooden church in Ibon. The church lost the image, but it was found later near a callos tree.

“We see interconnections, though, in these accounts. Probably, the image brought by the priest was the one ordered by our Lola Juana from Spain. For how come the image had been an heirloom of the Valmonte family until it was donated to the church in 1986?” Valmonte said.

The Pastora’s feast day was set on May 1 by the Valmonte family as thanksgiving for a good rice harvest. Masses and a grand procession traditionally mark her feast day.

“Several miracles have been attributed to our La Virgen Divina Pastora, including a miraculous cure,” Valmonte said. “That’s why in the early days, people from the provinces of Pangasinan, La Union, Ilocos Sur, Ilocos Norte, Abra, Cagayan, Isabela, Nueva Vizcaya, Bulacan, Bataan and Zambales came here to pray before her.”

Read Next
Siquijor ‘healer’: For every cure, there’s a plant
EDITORS' PICK
Hidilyn Diaz wins weightlifting gold in Tokyo Olympics
Harnessing technology for quality education
Duterte warns of possible lockdown if ‘more aggressive’ Delta variant spreads
Connect to PH’s fastest network with new Signature Plan Lite at only P599 per month
Tips for a cheerful life
Duterte: When I said I will fight drugs in 6 months, I thought it was like in Davao
MOST READ
Hidilyn Diaz wins weightlifting gold in Tokyo Olympics
Hidilyn shoots not only for gold but also for permanent place in PH sports history
Go to war with China over West PH Sea? It will be a ‘massacre’, says Duterte
Duterte acclaims Sotto: ‘He can become a good vice president’
Don't miss out on the latest news and information.