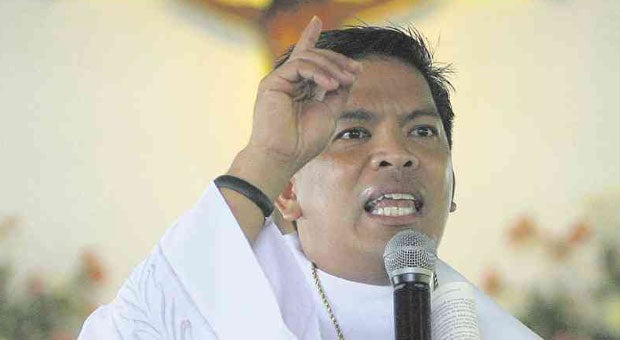 Fr. Fernando Suarez is a celebrated, albeit controversial, priest, known for drawing crowds in his healing Masses.

Born in 1967 in Barrio Butong in Taal, Batangas province, Suarez had humble beginnings. His father, Cervando, drove a tricycle and his mother, the former Azucena Mortel, was a seamstress. The eldest of four children (he has a sister and two brothers), he attended public school. At an early age, Suarez already knew how to earn a living. At 12, he rented out inflatables at Butong beach.

He holds a chemical engineering degree from Adamson University. After college, Suarez entered the Franciscan Order (Conventuals). He left after one-and-a-half year and enrolled at Christ the King Seminary in Quezon City but went absent without leave after six months.

In 1995, he met a French-Canadian student named Mark Morin who invited him to Canada and paid for his fare. They could have been partners in a business venture but Suarez wanted to pursue priesthood. He tried the Diocese of Winnipeg to study as a diocesan priest but it did not work out and he was made to leave. In 1997 he joined the Companions of the Cross, a newly established community of priests and seminarians in Ottawa. He was ordained in 2002 at the age of 35.

According to Suarez, when he was 16, he saw a paralyzed 60-year-old beggar woman outside Quiapo Church. He asked if she wanted him to pray for her, just to console her. After one Hail Mary, one Our Father and one Glory Be, the woman stood up and walked, he said.

In Canada, when Suarez was still a seminarian, a Canadian woman declared dead eight hours earlier also opened her eyes after he prayed over her. From there his healing ministry continued and in 2008, he returned to the Philippines to resume his healing work. The purported miracles are recorded in the newsletter of Mary Mother of the Poor (MMP)-Healing Ministry, a foundation Suarez established.

In February 2008, Lingayen-Dagupan Archbishop Oscar Cruz banned Suarez from holding healing Masses in his diocese in Pangasinan province, citing the Catholic Church’s Congregation of the Doctrine of the Faith, which requires a local bishop’s permission for Church-related activities conducted by those who do not belong to the diocese.

Cruz also questioned the selling of religious artifacts and solicitation of money for the construction of his healing center, which was originally a 5-hectare property in Batangas, until a 33-hectare land located in Amuyong, Alfonso, Cavite province, was donated to the MMP Foundation in 2010 by San Miguel Corp. The plan includes building a 33-story-high statue of Mary Mother of the Poor.

The Catholic Bishops’ Conference of the Philippines says it recognizes Suarez’s gift of healing but remains “watchful” of Suarez’s healing Masses and other activities.

A 2007 TOYM (The Outstanding Young Men) awardee for religious service, the priest has a program, “Healing Grace,” every Sunday night.—Marielle Medina, Inquirer Research