‘Battle is not over yet,’ say bishops, pro-life groups in Visayas | Inquirer News
Close
menu
search 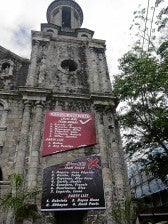 A Catholic church in Bacolod has cut in half a tarpaulin that tells the faithful whom to vote for and whom to junk in the  May 2013 senatorial elections (“Team Buhay, Team Patay”). INQUIRER FILE PHOTO

CEBU CITY, Philippines — The Supreme Court ruling that declares the reproductive health law as constitutional has not deterred the spirit of the Visayas-based pro-life advocates who vowed to continue fighting the law, which they have described as “immoral.”

“May God forgive them,” said Fr. Amadeo Alvero, Palo Archdiocese spokesperson, referring to the justices who voted in favor of the RH law.

He stressed that the high court ruling would not change their conviction that the “RH Law is not a law willed by God but a law made by anti-life people.”

The Church, he added, would continue to “uphold, respect and promote life which God wants.”

Bacolod Bishop Vicente Navarra said the provisions that were thumbed down by the Supreme Court should be considered as a little triumph.

“We need to take action and make a careful study and strategic pastoral response to this, because this battle is not over yet,” he said.

“In fact, it has just begun and the event today only makes us stronger,” he added.

Navarra stressed that they would continue to speak against the law and condemn it as an “immoral” measure constituting a grave violation of the principles of the right to life and the dignity of the human persons in the light of the authoritative doctrine of the Catholic Church.

“The challenge is to form and inform the consciences of our faithful because the real fight against the artificial contraceptive methods which are not accessible, is fought with in that sanctuary of conscience and where one makes a choice,” he said.

The second challenge would be for the church to strengthen its various family ministries, he said.

“We shall make our resistance known and felt in every nook and cranny starting from the basic ecclesiastical communities and parishes. This is our commitment and with ever greater intensity and energy, we shall not waver from it,” he said

A church leader in Iloilo also expressed dismay over the Supreme Court ruling.

He said the Catholic Church has always stood by its belief that the law “opens the door for abortion and abortifacients.”

If the decision of the high court would not be reversed, Oso said the Church would intensify its campaign and teachings on life and natural planning.

While seeing flaws in the law, the women’s group Gabriela in Panay welcomed the ruling of the high court, especially in addressing needs of women and children.

“The ruling also serves as a challenge to the government to prioritize health care as its basic responsibility to the people,” said Roxanne Arsaga, spokesperson of Gabriela Panay.

She said the government should ensure that free, accessible and comprehensive reproductive health would be available to women and children especially those coming from poor families.

For a church-based group in Cebu, the Supreme Court ruling did not mean the battle was over.

“We (pro-life groups) will regroup and discuss what strategies went wrong and improve it. Tuloy ang laban (The fight continues). This is not yet the end of the battle,” said Dr. Rene Bullecer, country director of Human Life International Philippines.

He, however, said they were a “bit happy” that some provisions were declared unconstitutional.  Reports filed by Carla P. Gomez, Joey Gabieta and Carmel Matus, Nestor P. Burgos Jr., Inquirer Visayas