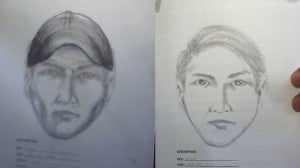 Artist’s sketch of the two suspected gunmen who killed journalist Rubylita Garcia. The city government has offered a P50,000 reward for any information that might help authorities. PROVIDED BY THE BACOOR CITY POLICE

MANILA, Philippines— We got the wrong man.

The Cavite police on Tuesday night said the man they arrested as a suspect in the killing of reporter Rubylita Garcia was not positively identified by the family of Garcia.

Aaron Cruz was arrested by the Cavite City police on Tuesday afternoon–a day after the Philippine National Police released the artist’s sketch of Garcia’s killers.

Tristan Garcia, 28, said his 10-year-old daughter and Garcia’s sister-in-law, who both saw how Garcia, a correspondent of the tabloid Remate, was shot several times in her residence on Sunday, said the police arrested the wrong person.

“Taas lang po ang nakuha (only the height matched),” he said, referring to gunman’s and that of the man the police arrested around 4 p.m. in Cavite City.

Cavite police information officer Superintendent Gerardo Umayao, in an earlier phone interview, confirmed that they arrested a possible suspect in Garcia’s slay, basing it on the cartographic sketch and the physical description provided to them by the witnesses.

In a phone interview, Cavite Governor Juanito Victor Remulla, who was at the police headquarters when Garcia’s family arrived, called it a “false positive” arrest.

“That is because everything matched, from the height, weight, their physical features, except the tattoos,” Remulla said.

“The man who shot (Garcia) has a smooth face. This one’s rough,” he added.

Even so, Remulla said the police had recovered illegal drugs from the man and thus would still be facing charges.

Before she died from her gunshot wounds, Garcia said she thought Supt. Conrado Villanueva, the police chief of Tanza town, could have ordered the attack on her house on Sunday morning, her son said on Monday.

Villanueva has been asked to step aside beginning Monday, said Senior Supt. Joselito Esquivel, the Cavite police director. “He was administratively relieved, although he is not a suspect,” Esquivel said in a phone interview.