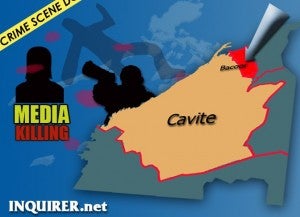 MANILA, Philippines–‎The Philippine National Police (PNP) assured on Monday that it would yield to the order of Malacañang to speed up the solving of the tabloid reporter’s murder in Cavite.

Earlier Monday, the Malacañang ordered the PNP to immediately solve the murder of tabloid reporter Rubylita Garcia in Cavite over the weekend.

‎”We urge the PNP (Philippine National Police) to exert maximum efforts to bring about the early arrest of the perpetrators of the killing of reporter-broadcaster Rubylita Garcia and bring them to the bar of justice,” Communications Secretary Herminio Coloma said.

Sindac said the PNP has created an investigating team under the Task Force Usig, a special police unit tasked to probe killings of activists and journalists.

Garcia, 52, was assassinated at her home in Bacoor City in front of her 10-year-old granddaughter and her sister-in-law Sunday.

She was a correspondent of Remate for the last 20 years and was a broadcaster at a local radio station.

A previous Philippine Daily Inquirer report said that if it would be proven that her murder was work-related, Garcia will be the 20th journalist killed in the line of duty under the Aquino administration.

Garcia’s 28-year-old son, Tristan, said that before she died, ‎ his mother was still able to tell him the name of a ranking police official in Cavite that she was at odds with.