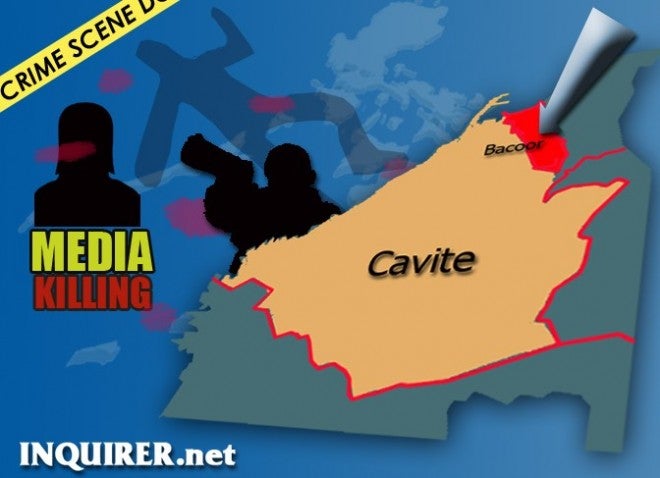 CAMP VICENTE LIM, Philippines—A female tabloid reporter was gunned down in full view of her 10-year-old granddaughter and a relative at her home in Bacoor City, Cavite province, early Sunday.

Rubylita Garcia, 52, became the latest victim of attacks on journalists. If her death is work-related, she will be the 20th journalist killed in the line of duty under the Aquino administration and the 160th since 1986, according to the National Union of Journalists of the Philippines (NUJP).

The two killers were not wearing anything to hide their identities, it was learned.

When they barged into the victim’s home at past 10 a.m. on Sunday, one of them declared, “Wala kaming ibang gagalawin (We will not touch anyone else),” before firing at least four shots at the journalist.

Garcia, who died at the hospital five hours later, was a correspondent of Remate for more than 20 years, said Garcia’s editor, Lydia Bueno.

Just recently, she also reported for a local radio station, according to her son, Tristan, 28.

Garcia was a member of the National Press Club and president of a newly formed group of journalists in Calabarzon (Cavite, Laguna, Batangas, Rizal and Quezon) called the Confederation of Active Media Practitioners Organization.

“We all know how hard-hitting she [was]. We are looking at politicians, even policemen [as possible masterminds],” Cavite police director, Senior Supt. Joselito Esquivel, said in a phone interview.

Garcia had just stepped out of the bathroom and was with Tristan’s 10-year-old daughter and Garcia’s sister-in-law on the first floor of their house in Barangay (village) Talaba when the attack happened around 10:15 a.m., Tristan said, quoting his daughter.

“I was upstairs, on our rooftop, preparing the laundry, when I heard gunshots. At first, I thought something exploded,” Tristan said in a phone interview.

“At first [the suspects were heard] calling out ‘Ruby, Ruby.’ Maybe they were trying to make sure mommy was home. When my daughter opened the gate to go out, the gunmen barged in,” Tristan said.

“One of them then said, ‘We are not going to touch anyone else,” he said.

Tristan saw his mother lying on the floor when he went down. “She could still talk when I took her to the hospital,” he said.

Garcia suffered four bullet wounds in the body and another in the arm. She died while undergoing an operation at St. Dominic Hospital, also in Bacoor, around 3:25 p.m., Esquivel said.

The killers escaped on a motorcycle.

Tristan said his mother, while they were on their way to the hospital, mentioned the name of a ranking police official in Cavite that she was at odds with.

Both he and Bueno, however, requested that the official’s name be withheld as investigation continued.

PO3 Romar Sinnung, the case investigator, said Garcia’s granddaughter had given a statement to the police, which was the basis of a composite sketch of the killers.

One was described as skinny and tall, while the other was short and plump, he said.

“Please help us get justice for mommy,” Tristan said.

Ruby, a widow, was always ready to help her relatives and friends, according to her son.

Bueno described her as a hardworking and “brave” reporter.

On Sunday, the NUJP issued a statement condemning the murder of Garcia.

“Again and again, we have been saying that one murder is too many. This latest killing shows that the government’s pronouncements on eliminating the culture of impunity surrounding the killings of journalists, lawyers, environmentalists and activists among others, have been nothing but lip service,” the statement read.

The NUJP in Quezon province is planning to organize an indignation rally for Garcia.

The Cavite police have formed a special investigating task group to handle the case, according to Esquivel.