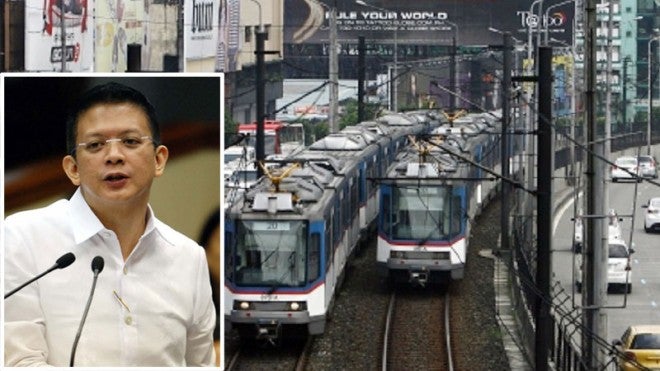 Sen. Francis Escudero (inset) said the Senate committee on finance, of which he is the chair, would take up with officials of the Department of Transportation and Communications the alleged extortion try on the Czech train maker Inekon in relation to how it slowed down the delivery of more coaches for the Metro Rail Transit. INQUIRER FILE PHOTOS

MANILA, Philippines—The Senate will start looking into the alleged $30-million extortion attempt on a Czech train maker when the scandal is raised in Monday’s inquiry into delayed government projects, including the purchase of 48 new coaches for the badly congested Metro Rail Transit (MRT).

But Sen. Francis Escudero, who filed the resolution for an inquiry into the Department of Transportation and Communications’ (DOTC) overdue tasks, said the committee on finance would take up with DOTC officials the alleged extortion try only in relation to how it slowed down the delivery of more coaches for the MRT.

Escudero, who’s also the chair of the finance committee, said it would be up to the Senate blue ribbon committee chaired by Sen. Teofisto Guingona III to investigate the graft angle, as it has jurisdiction over malfeasance in the government.

He added that his resolution to investigate the DOTC was to clear up the delays in the agency’s projects and not to look into the alleged attempt by MRT general manager Al Vitangcol III to extort $30 million from the Inekon Group of the Czech Republic.

“We might have to refer it to the blue ribbon committee once there are details of whatever graft and corruption and extortion occurred. But of course, in the hearing itself, I’ll ask that [question],” Escudero said in a telephone interview.

“I might be accused of covering up if I don’t,” he added.

President Aquino has ordered the National Bureau of Investigation to investigate the alleged extortion attempt on Inekon, which Czech Republic Ambassador to the Philippines Josef Rychtar exposed last year, raising doubts about the sincerity of the administration’s emphasis on good government.

Communications Secretary Herminio Coloma said on Sunday that Malacañang wanted to expedite the investigation, which Justice Secretary Leila de Lima said on Friday was already finished but that the NBI was still reviewing its findings.

The scandal centers on Vitangcol and his alleged “envoy” to Inekon, Wilson de Vera, a member of the President’s Liberal Party (LP).

Vitangcol, who has denied the allegations of Rychtar and Inekon CEO and chair Josef Husek, has been investigated by the DOTC and cleared.

But the internal investigation has failed to reach De Vera who, according to both Rychtar and Husek, in affidavits submitted to the NBI and the House of Representatives’ committee on good government and public accountability, asked Inekon on behalf of Vitangcol on July 10, 2012, to pay $30 million to win the bidding for a contract for 48 coaches for the MRT.

Shocked at the proposal, Husek and Rychtar said they refused, upsetting Vitangcol and De Vera, and landing Inekon on the DOTC blacklist.

Transportation Secretary Joseph Emilio Abaya denied that Inekon had been blacklisted and said the DOTC, too, wanted to get to the bottom of the scandal.

Abaya said he hoped the NBI, which was handling the criminal aspect of the investigation, had found De Vera.

The NBI, however, was not yet ready to announce its findings, which would need De Lima’s approval before being forwarded to President Aquino.

For a while, the opposition to Aquino tried to link the President’s sister Maria Elena “Ballsy” Aquino-Cruz and her husband, businessman Eldon Cruz, to the scandal, but Rychtar, in a statement submitted to the Department of Foreign Affairs, denied that the Cruzes were involved.

Coloma, speaking Sunday on state radio dzRB, stressed that Rychtar had declared that “none of the President’s siblings were involved in that case.”

The scandal forced a review of the bidding for the P3.77-billion contract for new coaches for the MRT, which was won by the Chinese company CNR Dalian Locomotive & Rolling Stock, delaying the MRT capacity expansion program.

Monday’s Senate committee on finance hearing will deal with  how quickly the DOTC uses its multibillion-peso appropriation to deliver vital transportation infrastructure to the public.

“I might concentrate on the reasons why the delay is setting in on the projects of the DOTC … The portion on whether money was asked from them, aside from the graft aspect, if it is proven, if it is shown, that’s definitely one of the causes of the delay of projects,” Escudero said.

He said his committee had so far invited only DOTC officials and members of an anticorruption watchdog to the hearing.

Escudero said, however, that he would not stand in the way of Inekon executives and Rychtar being invited to a subsequent hearing if a senator moves for their attendance.

“I will not prevent them from being invited, the Czech ambassador included, after checking with the Senate legal [department] if it is allowed,” he said.

Escudero said he could not recall a previous instance when a foreign diplomat was summoned to a Senate inquiry.

Bayan Muna Rep. Neri Colmenares and Navotas Rep. Tobias Tiangco are trying to get Rychtar and Husek, and Vitangcol and De Vera to a face-off at the House good government committee.

Can they be objective?

But Deputy Speaker Giorgidi Aggabao said on Sunday that the investigation would be a waste of taxpayers’ money and that he doubted if it would be fair, as “the supposed probers are not judges sworn to impartiality but politicians with a natural disposition and propensity toward [their] party and allies.”

Pampanga Rep. Oscar Rodriguez, head of the good government committee, said he was positive that the panel’s members will be color-blind when fellow LP members Abaya and De Vera are called to the inquiry.

But Aggabao said: “In an investigation involving an ally, they will participate in the probe but with preconceived favorable opinion, with reference to the merits of the case, not governed by facts.”

He added: “I anticipate that the members of the ruling party will enter the probe already with a fixed anticipatory judgment that no bribery ever took place. The minority will show an unreasonable bent to the other side of the issue. In the end, the probe will be all for naught because the conclusions did not yield to evidence.”

Colmenares is wary of efforts to play down the extortion attempt not only because LP members are involved but also because Ballsy Aquino-Cruz has been dragged into the scandal.

“From all indications, though, there seems to be powerful forces in Malacañang trying to cover up the real score on this issue. It is still not clear who all the players are as well as to how high up in the Palace are the culprits connected,” Colmenares said.

“Based on the testimonies of Ambassador Rychtar and Inekon chair Husek, presidential sister Ballsy Aquino-Cruz and her husband, Eldon Cruz, have nothing to do with the extortion try, but it is quite curious that it is the foreigners who exonerated the couple. The Department of Transportation and Communications and MRT officials are silent on this point,” Colmenares said.