Not your usual mountaineers in Sarangani 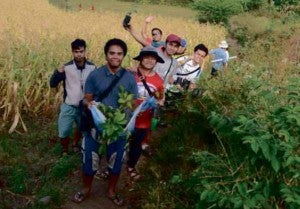 For a group of neighbors in Alabel town, however, what came out was a stronger friendship, a desire to discover hidden natural treasures in their province and, above all, a willingness to help uplift the lives of poor people in its hinterlands.

Meet Team Bundol Mountaineers. They are not your ordinary happy campers seeking to climb the next mountain or trek the hottest trails.

“We are not really into this to scale all the mountains in the Philippines. We just focus here in Sarangani province, and our reason for trekking is to help others, our fellow Sarangani residents, who lack the most basic necessities of life,” said Mardy Buletoy, a founding member of Team Bundol, in an interview.

The group has been active since 2011 and has helped a number of indigenous communities while discovering potential tourist attractions.

The idea came up in 2010, while downing shokong, a favorite Jägerbomb concoction made up of equal parts of Sioktong, a Chinese herbal liquor, and bottled energy drink.

“Our friendship was forged over these shots, while one of us played the guitar and we sang along,” said Buletoy, 29, who works at a gadget shop in a mall. “Back then, some of us, including me, had been joining other mountaineering groups. One night, I thought, why don’t we just climb together?”

The group’s name, “bundol,” is Ilonggo for “stupid.”

“One of our members, who runs a lechon shop, loves to say this word when his workers fail to do their jobs properly. So we teased him that he was bundol, too. And it stuck with our group,” said Bacquiano, 27, a freelance visual artist.

“But we are now giving a positive spin to Team Bundol. We decided that bundol for us should mean ‘backpackers united for the defense of life.’ All our activities are guided by this mission,” Lalisan said.

The first climb was on Independence Day in 2010, when they scaled the 2,286-meter-high Mt. Matutum in South Cotabato province. They called themselves then “Team North Face,” from the outdoor apparel vendor.

“We were really not prepared for that climb. We didn’t have cooking materials, we lacked climbing equipment, and we just brought loaves of bread for that climb,” Buletoy said. From then on, the group joined treks and climbs sponsored by other groups.

As the group began to discover hidden natural wonders in Sarangani, they also saw the dire poverty of indigenous peoples.

“In 2011, we discovered Atnayan Falls, in Sitio (subvillage) New Canaan, Barangay Pag-Asa, Alabel. It was a long way from civilization. We had to cross rivers so many times, climb mountains and walk plains just to get there,” Lalisan said.

“On the way, we saw children going to New Canaan Integrated School, taking off their uniforms as they prepared to cross the river. Such was the desire of the kids to go to school, they didn’t want their uniforms to get wet. And when we came to the school, we saw that their library had no books, they only had seven chairs. We decided to help these people,” he added.

The team was formally launched in August 2011. Its first major project, the Ecotrek, came three months later—to Atnayan Falls, organized to coincide with the founding anniversary of Sarangani in partnerships with the local government and other organizations.

“More than 100 mountaineers joined the Ecotrek and we aimed to bring books to New Canaan Integrated School and also to plant trees in the area. We divided the books and school supplies among the group, with each member carrying four or five books,” Lalisan said.

The group visited Atnayan and Basyawan Falls in 2012 and last year Lake Mofong in Barangay Domolok, Alabel, and  Siniel Falls in Barangay Kamanga, Maasim town, where the members gave books to Sofan and Balinbato elementary schools and planted trees in the lake in danger of drying up.

“We have delivered hundreds of books and school supplies, planted more than 400 trees, and established two tree nurseries in schools that we have visited, with 400 seedlings each,” Lalisan said.

Word about the team’s good deeds has spread, drawing new members. They now number 20, half of them school dropouts.

“If you want to be a member, we require that you have been to at least two invitational climbs in which  Team Bundol  participated, and finished at least two community service activities such as feeding or tree planting,” Landero, 20, a businessman, said.

Not all of the group’s efforts have been easy. Landero tells a story of a community afraid of strangers. “Having guests was apparently a new experience for them, and they feared it. But eventually, after talking to them about our purpose, they welcomed us,” he said.

But the response has been generally satisfying.

Buletoy said in New Canaan, an 8-year-old girl told him, “Sir, so this is how dinosaurs looked like!”

“I was moved by that,” he said. “If we had not delivered books to the school, these children maybe would not even know how giraffes, lions, wild animals looked like.”

Gov. Steve Solon said: “Groups like Team Bundol are a valuable help for us. Sarangani is one of the poorest provinces in the country, and many of our constituents live in far-flung areas with no paved roads. Through them, we are able to reach and serve more people in the province.”

The group was recognized as a finalist in the 11th Ten Accomplished Youth Organizations (Tayo) Awards this year, while also winning the Coke Barkada Award. The award was given by Tayo Awards Foundation, Coca-Cola Philippines Inc. and the National Youth Commission.

“We don’t earn anything from what we do,” Buletoy said. “When we see kids smiling because we have helped them, that’s fulfillment for us. We are OK with that.”