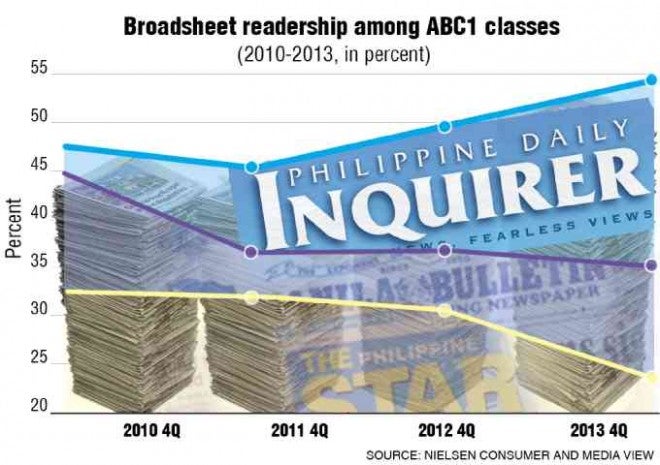 MANILA, Philippines—The Philippine Daily Inquirer is No. 1 among ABC1 readers in major urban areas in the country, according to the 2013 fourth quarter consumer and media view survey by The Nielsen Co.

Asked what newspaper they read the day before, 54 percent of the ABC1 respondents named the Inquirer. Manila Bulletin was a far second with 35 percent and Philippine Star, third, with 24-percent readership.

The total exceeds 100 percent because it includes readers who said they read more than one broadsheet the day before.

The survey was conducted from Nov. 11 to Dec. 1 last year and had 2,500 respondents. It had a margin of error of plus-or-minus 2 percentage points.

The Inquirer has led among ABC1 broadsheet readers since 2010. Its readership level increased from 47.5 percent in 2010 to 54 percent in 2013, while that of the other broadsheets suffered a decline.

Readership of the three broadsheets softened in 2011, but the Inquirer (45.3 percent) maintained its lead over Manila Bulletin (36.5 percent) and Philippines Star (31.9 percent.)

Class AB readers (“upper class”) include graduates of exclusive colleges and universities as well as those with master’s or doctoral degrees.

Also in this category are professionals, members of senior management and owners of medium to large businesses. Readers falling under this category reside in exclusive subdivisions and townhouses.

Class C1 readers (“upper middle class”) include graduates from state colleges or universities, members of supervisory or middle management, or owners of small businesses. Readers in this category live in mixed neighborhoods with predominantly large houses, according to Nielsen.

Nielsen’s Consumer and Media View is a comprehensive study on media consumption, attitudes, product consumption and lifestyles of Filipinos.

It is conducted quarterly among males and females, 10 years and older, in Metro Manila and 56 key cities and municipalities in the country, across all socioeconomic classes.

The 2010 to 2012 surveys had a rolled sample size of 8,000 respondents per year and were conducted in Metro Manila and 21 key cities in National Urban Philippines. They each had a margin of error of plus-or-minus 1.1 percentage points.

The Nielsen Co. has been providing various industries with advertising intelligence, media metrics and advanced analytical tools for more than 90 years.

A love affair with Inquirer

Read Next
Delfin Lee to ‘tell all’ at Senate hearing
EDITORS' PICK
New Year, New Rediscoveries
Acer Philippines welcomes you to its first flagship store
House inquiry on unilateral termination of UP-DND accord pushed
Gov’t mulls review of age restrictions by end-January or February — official
PHI and Primark vs. Premier, SM Investments Corporation and CAIL
Duterte not consulted on decision to end UP-DND accord, says Palace
MOST READ
Sotto chides Roque’s ‘war-like’ remark: You expect us to treat resource persons with TLC?
Plagued with ailments, ex-vegan finds ‘cure’ in carnivore diet
Woman, 21, shot in broad daylight in Cotabato town
Mom, GF of UK variant patient, and 9 others test positive for Covid-19
Don't miss out on the latest news and information.