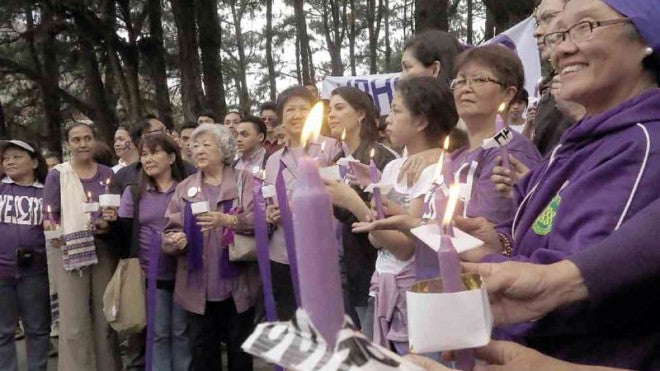 PURPLE TEAM FOR RH LAW. Supporters of the reproductive health (RH) law stage a candle vigil at a compound in Baguio City on Monday where Supreme Court justices are expected to deliberate on whether to lift the suspension of the controversial RH law. EV ESPIRITU/INQUIRER NORTHERN LUZON

“Judgment day” has sent supporters and opponents of the reproductive health (RH) law holding separate vigils in Baguio City where the Supreme Court is expected to deliberate on the controversial law more than a year after it was suspended.

In the summer capital for its annual summer session, the 15-member high tribunal has put the 14 petitions challenging and defending the constitutionality of the RH law on its agenda at Tuesday’s en banc session.

The petitions are now ripe for resolution as it has been eight months since the high court concluded five hearings on oral arguments on the Responsible Parenthood and Reproductive Health Act of 2012, or Republic Act No. 10354.

The law, signed by President Aquino in December 2012, became controversial for Catholic groups because it allows the state to use public funds to educate the youth on RH matters, and provides couples with contraceptives. The law also aims to improve maternal health care.

The high court first stopped the implementation of the law for four months on March 18, 2013. It issued a status quo ante order after Pro-Life Philippines Foundation Inc. and Catholic Church groups questioned the law for violating constitutional provisions guaranteeing the right to life.

Jaro Archbishop Angel Lagdameo has issued a circular to the clergy, religious organizations and laity encouraging the daily praying of the rosary and holding of prayer vigils in churches for the rejection of the controversial law.

Lingayen-Dagupan Archbishop Socrates Villegas said a ruling in favor of the RH law would not make the law right.

Villegas, also president of the Catholic Bishops’ Conference of the Philippines (CBCP), said such ruling would be “morally wrong.”

“With or without the Supreme Court decision, it is the duty of the Church to be teaching life. Our duty does not depend on civil laws. Our duties come from God,” said Villegas in an interview with reporters on Friday.

Supporters of the law are unfazed. Celebrities, like actress Giselle Toengi, filmmaker Kidlat Tahimik and former Health Secretary Esperanza Cabral, on Monday joined a vigil mounted by proponents of the RH law in front of the Supreme Court’s summer compound to appeal for a favorable ruling on the law’s constitutionality.

The pro-RH groups, whose members wore purple shirts, lined the roadside in front of the compound, where justices have been holding their annual summer sessions since March 31.

They also brought along copies of the results of a Social Weather Stations survey indicating that more Filipinos want RA 10354 to be implemented.

The Forum for Family Planning and Development Inc. commissioned the survey, covering March 27 to 30, which showed that 84 percent of Filipinos polled agreed with the premise that “the government should provide free supply or service to the poor who wish to use any family planning method.”

The survey also found that 68 percent of the respondents were aware of the RH law, and 72 percent favored its implementation. It said 77 percent agreed with the survey proposition that “the RH law follows what the Constitution should stand for, so it is only proper for the Supreme Court to allow it.”

It was not certain, however, whether the high court would vote on the draft resolution prepared by one of the justices assigned to be in charge of the RH law petitions.

“The only thing that is sure is that they will discuss it. It’s not sure if they will vote on or decide on the petitions,” a source familiar with the agenda of the high court said.

“It depends on them,” the source told the Inquirer.

The Bishop of San Pablo Diocese has urged the Catholic constituents in Laguna province and the nation to storm the heavens for the rejection of the RH law.

In an e-mail sent to all the clergy of the diocese, Bishop Bienvenido M. Famadico suggested activities before April 8 that would urge Supreme Court to reject the RH law. Among these were the sending of a delegation from one’s parish or community to the Supreme Court compound in Baguio, pealing of Church bells for Angelus at 12 noon on April 7 and 8, and putting of red ribbons in front of churches, seminaries, monasteries and homes.

In Bacolod, Bishop Vicente Navarra on Monday called “upon all men and women of goodwill to pray for the guidance of our Supreme Court justices as they decide on the fate of the Filipino families and the unborn.”

In solidarity with the rest of the Catholic churches in the country, the bells will ring at noon Tuesday for Angelus in all churches in the Diocese of Bacolod, Navarra said.

Pro-RH advocates have also staged vigils, rallies and declared public pronouncements in support of the enactment of the law as they believe it will give Filipino women a “prochoice”option in planning for their families and help reduce teenage pregnancies by giving sex education to minors.

At 11 a.m. on Monday, the pro-RH groups held a white board in Baguio marked with the number 25.

“It stands for 25 hours. We have a countdown [to the en banc session],” said a supporter of RH law.

The law’s critics have also been holding a prayer vigil at the Baguio Cathedral, in anticipation of the court’s en banc deliberation.

The Commission on Family Life of the Diocese of Baguio has been hosting people against the law at the cathedral since March 31.

Toengi and Cabral went to Baguio to join the pro-RH vigil, along with former Akbayan Rep. Risa Hontiveros and tour guide Carlos Celdran.

Akbayan officials said two busloads of supporters would reinforce the number of RH advocates gathering in front of the high court’s compound in Baguio.

One of the artists rolled around with a baby doll until it burst, smearing paint all over the street.

Tahimik said the art performances, while shocking to some, were intended to sustain the dialogue regarding RH and the community’s sexual mores.

Cabral said the law was intended to educate Filipinos about sexuality. “But the conservatives twisted the law’s objective into an unending and confusing dispute over spirituality, the economy and morality. The RH law requires the government to provide safe ways to aid people who want to be pregnant or who want to prevent pregnancies.

“But after a decade of blocking the crafting of an RH law, it was the conservatives who choose for these people, and their decision is for them to keep making babies,” Cabral said.

During the oral arguments last year, some justices led by Senior Associate Justice Antonio Carpio and Marvic Leonen expressed skepticism on the capability of the high court to rule on the constitutionality of the RH law as the main challenge against it was on when life begins.

“It is now a question on when does conception occur—the time of fertilization or upon the implantation from the walls of the uterus. So, you are asking the 15 members of this court, none of whom are doctors, to decide when conception happens,” Carpio said in the first oral arguments.

Leonen said the petitioners were giving an “awesome” responsibility to the high court to make such determination and not the “24 senators… 200 members of (the House of Representatives) and the President who were elected by millions.”

Leonen also said that the anti-RH petitioners were apparently “making us (high court) a super-agency.”

Even Chief Justice Ma. Lourdes Sereno held that the high court was not there to answer “metaphysical” and “theological” questions but to balance the interests of the unborn child with other constitutional values and objectives.

Sereno said the petitioners had put the high court, whose members are “unelected,” in a “difficult” place, especially since the Constitution did not define conception as fertilization.