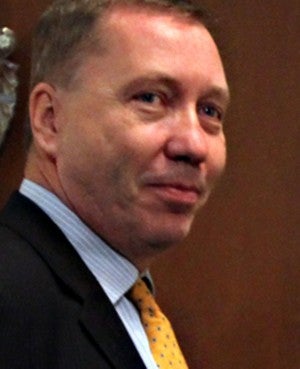 MANILA, Philippines—Czech Ambassador to the Philippines Josef Rychtar on Monday said he was ready to face Metro Rail Transit (MRT) general manager Al Vitangcol III in any forum—whether in Congress or in court.

“I’m not afraid of him,” Rychtar said in a text message to the Inquirer hours after Vitangcol challenged the diplomat to shed his immunity and face him in court and Sen. Francis Escudero called on the ambassador to bring criminal charges against the MRT chief.

Rychtar said he had “no problem” with dropping his diplomatic immunity, a special privilege under the Vienna Convention on Diplomatic Relations that gives diplomats safe passage and protection from any lawsuit in their host countries.

The ambassador said Vitangcol and De Vera asked Inekon to pay $30 million to win the contract for 48 coaches for the MRT.

Inekon CEO and chair Josef Husek confirmed the extortion attempt and he and Rychtar submitted sworn statements to the National Bureau of Investigation, which President Aquino had ordered to investigate, and to the House committee on good government and public accountability.

Rychtar and Husek, however, have not filed charges against Vitangcol, who denied their allegations.

Malacañang also urged Rychtar to bring charges against Vitangcol, who had been cleared by the Department of Transportation and Communications (DOTC) after an internal investigation.

In a briefing for reporters at the Palace on Monday, presidential spokesman Edwin Lacierda acknowledged questions about Rychtar’s motives, noting that the diplomat leveled the charges at Vitangcol months after his allegations had been initially investigated.

Indicating that he did not know that Rychtar had submitted a statement to the NBI, Lacierda said: “And if he did cooperate, well and good. And if he did not, or if he hasn’t cooperated yet, we certainly encourage him to speak up before the proper body and not just in the media.”

The NBI handled the criminal investigation and Justice Secretary Leila de Lima said Monday that the bureau would release its findings soon.

Still, reporters asked Lacierda if Rychtar’s allegations merited a criminal investigation or whether the diplomat was only sour-graping because Inekon did not win the MRT contract.

“It may be one, it may be two, it may be both,” Lacierda replied. “The question is valid: Is this sour-graping or is there really a [need for an] investigation? And I don’t know. We just have to go through the investigation proper.”

There were suggestions that Rychtar be declared persona non grata for accusing MRT officials of extortion but Lacierda rejected them.

“We are not going so far as to declare him persona non grata,” Lacierda said. “I think that is not [on] the horizon [for] the [Department of Foreign Affairs]. There is an investigation process going on so we will just wait for that.”

De Lima said she had talked with NBI Director Virgilio Mendez about the investigation, but did not disclose details from their discussion.

She said the NBI was reviewing its findings, adding that the investigators had obtained sworn statements from all parties involved, including Rychtar.

“I know he was questioned by the investigators,” she said.

De Lima said she would send the NBI report to President Aquino soon.

Vitangcol’s alleged extortion attempt on Inekon came up at Monday’s hearing on the delayed projects of the DOTC called by the Senate committee on finance headed by Escudero.

Answering questions from Escudero, Vitangcol, who attended the hearing, said Rychtar’s allegations stemmed from the MRT deal involving the purchase of additional coaches.

Vitangcol said De Vera was part of the previous consortium that undertook the operations and maintenance of the MRT, not of the present contractor.

De Vera is in Beijing, from where he denied Rychtar’s charges in a telephone interview with GMA 7 on Monday night.

He dared Rychtar to join him in a polygraph test to see which of them is telling the truth.

Vitangcol defended the MRT’s decision to buy 48 coaches from the Chinese company CNR Dalian Locomotive & Rolling Stock, which won a bidding for the contract in March last year.

Rychtar said Inekon did not participate in that bidding because the terms were “not objective and the price and terms of delivery were unrealistic.”

Vitangcol said all the people named by Rychtar had said that “there was no truth to the things said by the ambassador.”

He explained that Inekon’s offer for each coach was $3.3 million, which was more than the initial government budget of $3 million.

Further study, he said, reduced the budget per car to just $1.8 million.

He repeatedly denied Rychtar’s allegations and dared the ambassador to shed his diplomatic immunity so he could seek redress in Philippine courts.

Vitangcol repeated the challenge in a talk with reporters after the hearing: “Shed your immunity and I will face you in court.”

“[If] he really has basis, I am encouraging the ambassador to come out formally and file the necessary complaints against those concerned,” Escudero told reporters after the hearing.

He said he would support a Senate blue ribbon committee inquiry into the alleged extortion attempt.

“Perhaps the investigation will start with the allegation by somebody who’s willing to put it in a sworn statement,” he said.

“It wouldn’t be right to invite people or implicate certain names just like that based on gossip,” Escudero added.

The House good government committee is investigating Rychtar’s charges. Rychtar said he had long been prepared to attend a public hearing if called by the committee.

The committee held its first and only session on the alleged MRT extortion attempt two months ago.

“I was ready even last time, but I was out of the Philippines at the time of the public hearing. I am willing to go there but I don’t know when is the next chance,” Rychtar said.

In his reply to the invitation of the committee chair, Pampanga Rep. Oscar Rodriguez, in December, Rychtar said: “I confirmed that an extortion attempt took place in July 2012 followed by other suspicious circumstances which led to a questionable bidding process in March 2013.”

Rodriguez said he had yet to consult with members of the committee on when to resume the inquiry and who should be summoned.

Congress is on recess and will return on May 5.

Inekon’s Husek has corroborated Rychtar’s account of De Vera and Vitangcol’s “corruption offer” in a witness statement drafted in Prague in August.

The statement was one of the documents forwarded by Rychtar to the NBI and to the House good government committee.—With reports from Christian V. Esguerra and Christine O. Avendaño

Read Next
Thousands of Arabs have no water in Jerusalem
EDITORS' PICK
Pre-order the new vivo Y20s [G] to get a free TWS earphone
PH biotech firm, pharma group eye clinical trials for ivermectin use against COVID-19
Speed up your game with the new vivo Y20s [G]
NCMH adds 900 beds for mild COVID-19 patients
Pru Life UK receives four golden arrows for solid corporate governance
WHO says not to use ivermectin on COVID-19 patients
MOST READ
Stop ‘creeping occupation’ of ‘militia’ boats in WPS, Pacquiao asks China
Bea Alonzo clarifies status of her relationship with Dominic Roque
Convicted former aide of Sen. Bong Revilla dies — BuCor
Locsin to China: ‘Then move out’
Don't miss out on the latest news and information.