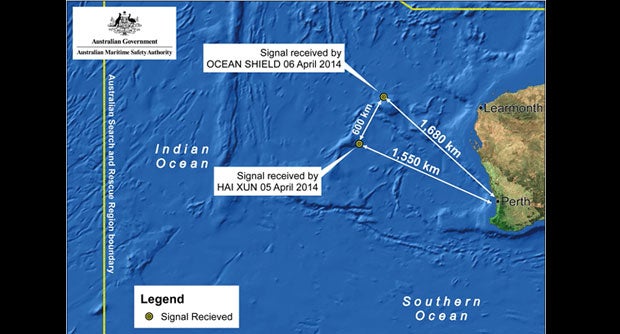 This image provided by the Joint Agency Coordination Centre on Monday, April 7, 2014, shows a map indicating the locations of search vessels looking for signs of the missing Malaysia Airlines Flight 370 in the southern Indian Ocean. An Australian official overseeing the search for the missing Malaysia Airlines plane said underwater sounds picked up by equipment on an Australian navy ship are consistent with transmissions from black box recorders on a plane. AP

PERTH — An Australian navy ship has detected new underwater signals consistent with aircraft black boxes, the search chief said Monday, describing it as the “most promising lead” so far in the month-old hunt for missing Flight MH370.

Retired Australian defense force chief Angus Houston said the acoustics, emanating from deep down in the Indian Ocean, showed that the multinational search by ships and planes seemed to be “very close to where we need to be”.

The apparent breakthrough comes as the clock ticks past the 30-day lifespan of the emergency beacon battery fitted to the black box of the Malaysia Airlines jet, which vanished on March 8 with 239 people on board en route from Kuala Lumpur to Beijing.

“We have not found the aircraft yet, we need further confirmation,” he said, while describing the information received over the past 24 hours as “very encouraging”.

One of the contacts continued for two hours and 20 minutes with the second lasting for 13 minutes. “On this (second) occasion two distinct ping returns were audible,” Houston said.

“Significantly, this would be consistent with transmission from both the flight data recorder and the cockpit voice recorder.

“This is a most promising lead and probably in the search so far it’s probably the best information that we have had,” the former air chief marshal said.

“We are now in a very well-defined search area which hopefully will eventually lead to the information that we need to say that MH370 might have entered the water just here.”

The hunt was adjusted to the southern end of the search zone Sunday after corrected satellite data showed it was more likely the plane entered the water there. The location is thousands of kilometers south of the flight’s scheduled route to Beijing.

Malaysian inquiries into the aircraft’s disappearance have centered on hijacking, sabotage or psychological problems among passengers or crew, but there is no evidence yet to support any of the theories.

In the absence of confirmed wreckage, the black box or other firm evidence, relatives of those aboard — who were mostly Chinese — have endured an agonizing wait for information.

Houston called on the public to treat the latest information cautiously, given the sensitivities of the families of those presumed lost.

“It could take some days before information is available to establish whether these detections can be confirmed as being from MH370,” he added.

The Ocean Shield is using a “Towed Pinger Locator” lent by the US Navy. The Australian vessel and Britain’s HMS Echo had been scouring separate ends of a 240-kilometer track, converging on each other, when it detected the acoustic noise.

Both ships and their towed-pinger equipment operate at significantly reduced speed to plumb depths of three thousand meters or more.

The latest acoustics were picked up after the Chinese vessel Haixun 01 detected two signals about 300 nautical miles away which officials said were on a frequency used for aircraft flight data and cockpit voice recorders.

Australian authorities have said the Haixun 01 had twice picked up a signal — once for 90 seconds on Saturday and another more fleeting “ping” on Friday a short distance away.

Houston said Haixun 01 was in waters about 4.5 kilometers (nearly three miles) deep, meaning “any recovery operation is going to be incredibly challenging and very demanding and will take a long period of time” if the plane is found there.

He noted that when Air France Flight 447 plunged into the Atlantic in 2009, it took two years to find the black box on the ocean floor — long after wreckage was found in the crash’s immediate aftermath.

“Essentially this (MH370) has been done without finding any wreckage thus far and I think it’s quite extraordinary, and what I would like to see now is us find some wreckage.”

Read Next
Napoles to have biopsy today
EDITORS' PICK
Beyond the Chocolate Hills: A farm-to-table, heritage culinary adventure of Bohol
A massive highway complex makes living in the South highly attractive
Guarding Sara: Why next VP is getting own security team
House energy committee chair Arroyo bats for cheap electricity
WHO says monkeypox is not yet a health emergency
Metro Manila logged most number of new COVID-19 cases — OCTA Research
MOST READ
Leon Barretto steps up for sisters, asks dad Dennis Padilla: ‘Please stop resorting to public shaming’
LOOK: Rita Daniela pregnant with first child
Marjorie Barretto to speak up on Dennis Padilla, kids’ relationship ‘in time’
Bea Alonzo, under lie detector test, says she wants prenup agreement with future husband
Don't miss out on the latest news and information.