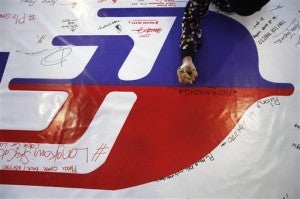 A woman writes a message on a 60-meter long banner with the Malaysia Airlines logo, filled with signatures and well wishes for all involved with the missing Malaysia Airlines jetliner MH370 at the Kuala Lumpur International Airport, Sunday, March 16, 2014 in Sepang, Malaysia. AP FILE PHOTO

(We are reposting this article by The Star of Malaysia which was posted at the Asian News Network website on March 19, 2014)

A report by a United Nations-backed watchdog has given fresh hope that the missing Malaysia Airlines Flight MH370 could still be found intact while reports from a far-flung atoll in the Indian Ocean – Kudahuvadhoo – suggest it could be near there.

Austria-based Comprehensive Nuclear-Test-Ban Treaty Organi­zation (CTBTO), which has extremely sensitive sensors throughout the world, says it did not detect any explosion or crash – both on land or at sea – since the aircraft disappeared on March 8.

“Our data could potentially shed light on the whereabouts of flight MH370. We owe it to the anxious families waiting for news of their loved ones that this potential is used to its fullest,” he said on the CTBTO website.

While the system was put in place primarily to detect nuclear explosions, it can also detect the explosion of a large aircraft as well as its impact on the ground or on water.

CTBTO stations have detected some plane accidents in the past, including the crash of an aircraft at Narita airport in Japan in March 2009.

If the CTBTO information is correct, it raises questions over where the plane is now. Investigators have not ruled out that the plane could have crashed in the Indian Ocean but they are also looking at possible sites where it could have landed.

In the southern corridor, several islands have been identified for scrutiny.

These include Male in the Maldives, the Diego Garcia United States air base, an airport in Sri Lanka – all of which have reportedly been downloaded into the aircraft simulator in the house of the plane’s pilot Capt Zaharie Ahmad Shah.

Others include the Christmas Islands and the Cocos Keeling Islands, also in the Indian Ocean.

Residents of the remote Maldives island of Kudahuvadhoo in Dhaal Atoll have reported seeing a “low flying plane” on the morning the plane disappeared. Diego Garcia is just south of the atoll.

Several residents of Kudahuvadhoo told a local news portal that they saw a “low flying jumbo jet” at around 6:15am on March 8.

They said that it was a white aircraft, with red stripes across it – which is what Malaysia Airlines planes typically look like.

Eyewitnesses from the Kudahuvadhoo concurred that the aeroplane was travelling North to South-East, towards the southern tip of the Maldives – Addu. They also noted the incredibly loud noise that the flight made when it flew over the island.

“I’ve never seen a jet flying so low over our island before. We’ve seen seaplanes, but I’m sure that this was not one of those. I could even make out the doors on the plane clearly,” said an eyewitness.

Mohamed Zaheem, the Island Councillor of Kudahuvadhoo, told the portal that the residents of the island had spoken about the incident.

The Times of UK also quoted the manager of the Blue Leaf Guesthouse on the atoll as seeing a large plane flying very low over the island.

Speaking from a fishing boat, he too said the plane had blue and white markings.

Satellite data suggests that the last “ping” was received from the flight somewhere close to the Maldives and Diego Garcia.

There is also speculation that if the plane, that was last detected at 2:15am off Phuket, had headed north, it could have “hidden” itself near Singapore Airlines flight SQ68, also a Boeing 777-200, thus tricking ground radar controllers as it flew past Laos, Myanmar, China and India.

It could have then disengaged itself and landed in any of several airports in the area including in Turkmenistan, Kyrgystan, Nepal or, ominously, in Urumqi which is the capital of the Xinjiang Uighur Autonomous Region in China.

The Uygurs are rebelling against China and, soon after the missing plane, there was a letter circulated which seemed to claim that it had indeed been seized by the Uygurs. The Star/ANN

RELATED STORIES
Media absorbed in a made-for-TV mystery
What if the missing Malaysia plane is never found?