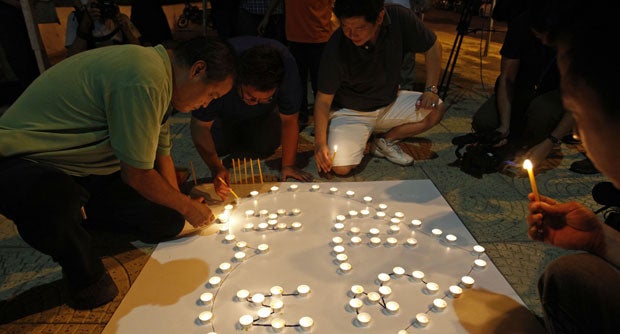 KUALA LUMPUR — The stubborn mystery of flight MH370’s whereabouts has paralyzed efforts to diagnose what went wrong, prompting calls for new safety nets to ensure no airliner ever disappears again.

More than four weeks after the Malaysian Airlines jet vanished in an apparently deliberate diversion, investigators still lack the hard evidence required to dissect an air disaster and recommend change.

Signals detected in the Indian Ocean, where the plane is thought to have crashed, have raised hopes they may be from the plane’s “black box”, but authorities warned of the extreme difficulty faced in finding the recorders in the vast waters.

The vanishing of MH370 has already given traction to a range of new proposals, with constant in-flight tracking of all passenger aircraft at the forefront.

“Having an improved way of tracking aircraft and always knowing where every aircraft is at any given time is a very important thing,” International Air Transport Association (IATA) chief Tony Tyler said in Kuala Lumpur last week.

“This is clearly now a high priority.”

Beyond normal radar, the key tracking method is the Aircraft Communications Addressing and Reporting System (ACARS), which transmits digital messages on the plane’s vital signs — including abnormalities — via satellite or VHS radio. It is used by major airlines.

But carriers can save money by opting for less-detailed, less-frequent transmissions, and coverage varies widely. Malaysia Airlines, for example, has said MH370 transmitted only every half-hour.

Calls are mounting for the industry and regulators to consider mandating real-time satellite tracking.

Before MH370, this “wasn’t seen as a priority,” said Ken Hylander, president of the US-based Flight Safety Foundation.

“Clearly this thought process needs to be re-examined by the industry and regulators.”

Other proposals range from cameras in the cockpits to re-examining the pilot’s ability to shut off communications systems when needed.

Resistance to far-reaching change is expected.

Already operating on thin margins, airlines may balk at new costs from stepped-up tracking, which likely would be passed on to price-conscious travellers, and experts warn the data could overwhelm systems.

Militating against major change is the widespread view of MH370 as a perfect storm of events unlikely to be repeated in what is overall an extremely safe industry.

The Boeing 777’s ACARS and its transponder — which relays a plane’s position — are believed to have been switched off.

But no evidence has emerged to support any of the various theories, which include a hijacking, pilot sabotage, or a sudden incapacitating event that left the “ghost plane” to fly until it ran out of fuel.

“Given that MH370 might be viewed as an extremely rare event which defied several normal safeguards, an airline might feel the added cost burden would realistically provide no benefit,” said David Kaminski-Morrow, air transport editor of Flightglobal magazine.

But unless MH370’s black box is found, stepped-up tracking is emerging as the only feasible response for an industry known for methodically analysing accidents and finding appropriate tweaks, experts said.

Talk of real-time tracking first emerged after Air France flight 447 crashed in the Atlantic in 2009, killing all 228 aboard.

Debris was found five days later, but uncertainty over the exact crash site delayed retrieval of the “black box” of flight data for two years. It revealed systems malfunctions and subsequent pilot error were both to blame.

The IATA’s Tyler said it was time to “accelerate” ideas arising from AF447.

He said the IATA will gather experts to study MH370, including the UN’s standards-setting International Civil Aviation Organization (ICAO).

The industry is also expected to reassess whether the prerogative of pilots — as the all-powerful captain of the ship — to switch off signalling systems remains defensible in the age of terrorism, said Remi Jouty, director of French air crash investigation agency BEA, which probed Air France 447.

“The loss of this plane has triggered so much attention that this will be examined very seriously, especially because it seems to have been deliberate,” he said.

Giving pilots an off-switch is a key safeguard, for example if a faulty electrical circuit is causing a fire.

But the September 11, 2001 terror attacks highlighted how the system can backfire spectacularly.

The hijackers of three of the four commandeered aircraft “hid” the planes by turning off their transponders.

“This is where the problem is. There needs to be a balance,” said Ravikumar Madavaram, aerospace consultant with Frost & Sullivan Asia Pacific.

“But MH370 shows it may be time for a change, and this really needs to be thought through, and I think it will be.”