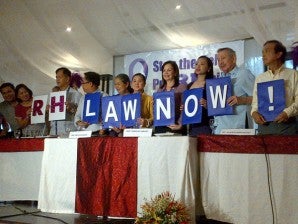 As of March 14, 2014, at least 72 percent of adults surveyed favor the RH law, the SWS said as quoted by the Philippine Information Agency Cordillera in its Twitter account.

At least 84 percent of Filipinos aged 18 years old also agree that the government should provide free services to the poor who want to use family planning methods, the SWS said.

Also, 68 percent of Filipino adults are aware of RH law as of March 14 before the survey, while 32 percent have been aware after the survey.

The survey was conducted from March 27 to 30 with a sample size of 1,200 adults and a margin error of three percent, the SWS added in the report.

The SWS results were released a day before the Supreme Court is expected to decide on the law that has been stalled since it was approved in Congress.

RH advocates staged vigils and mass actions in Baguio city as they await the high court’s ruling during its summer sessions there.

The controversial law mandates the government to provide access to family planning methods such as contraception, a sensitive topic in this predominantly Catholic country. The Roman Catholic church has opposed the measure on the grounds of morality.