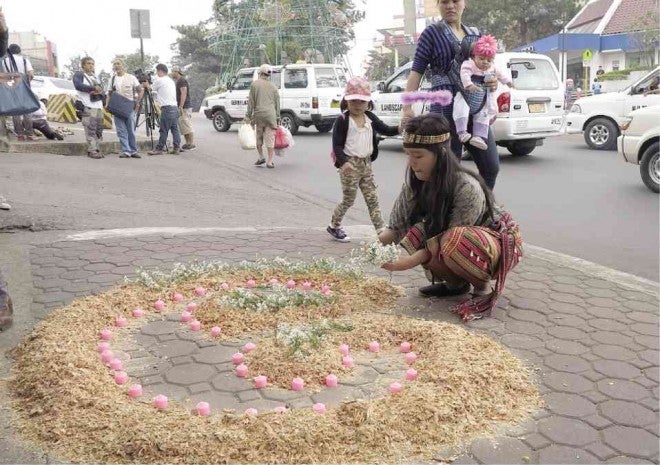 CORDILLERA artist Dumay Solinggay shapes a fertility symbol at a corner of downtown Session Road, composed of sawdust, small white flowers and pink candles, to dramatize her support for the reproductive health law. RH proponents marched down Session Road in Baguio to tie purple ribbons around street lamps and signposts, as they start a series of activities aimed at drawing attention to the law. The Supreme Court, which is in Baguio for its annual summer session, is scheduled to rule on the constitutional challenge against the law. EV ESPIRITU/INQUIRER NORTHERN LUZON

So members of groups like the Forum for Family Planning and Development Inc. marched on Sunday and tied purple ribbons around trees and signposts lining Session Road to signal the start of an advocacy vigil as they await a ruling from the Supreme Court on the constitutionality of RA 10354 or the RH law during the high court’s summer sessions here.

Baguio artists accompanied the marchers and set up art installations to express their support for the law.

The vigil would take place in front of the court’s Baguio compound today to await a ruling, which advocates expect to be reached following the court’s April 8 en banc session.

The government had been unable to enforce the law after it was challenged by Pro-Life Philippines Foundation Inc. and groups affiliated with the Catholic Church for violating charter provisions guaranteeing the right to life and freedom of religion.

The law guarantees everyone’s right to choose how they build their respective families, but it also requires the government to “promote and provide information and access, without bias, to all methods of family planning, including effective natural and modern methods, which have been proven medically safe, legal, nonabortifacient and effective in accordance with scientific and evidence-based medical research standards.”

This includes the enforcement of an age-appropriate curriculum for elementary schools.

In statement, NYC said the government’s inability to enforce the law meant that teenagers were deprived of services and information that would have helped them address sexuality and pregnancy.

Cendaña said the government would provide RH services immediately should the high court rule in favor of the law.

“The government has been prepared [since March 2013 when the law took effect]. The implementing rules and regulations [of the law] has been completed and an age-appropriate curriculum teaching reproductive health to students has also been completed,” Cendaña said.

He said the government is willing to “go back to square one” to draw up and fight for a new RH measure should the court conclude that RA 10354 is unconstitutional. “But, of course we hope that would not be the case,” Cendaña said.

Critics have addressed sections of the law which supposedly conceal loopholes allowing abortion to be legalized in the Philippines. RH proponents, however, said the law’s critics had misread the law.

“While this act recognizes that abortion is illegal and punishable by law, the government shall ensure that all women needing care for postabortive complications and all other complications arising from pregnancy, labor and delivery and related issues shall be treated and counseled in a humane, nonjudgmental and compassionate manner in accordance with law and medical ethics,” the law states. Vincent Cabreza and Jhoanna Marie Buenaobra, Inquirer Northern Luzon