UP lets off the hook four students barred from graduating 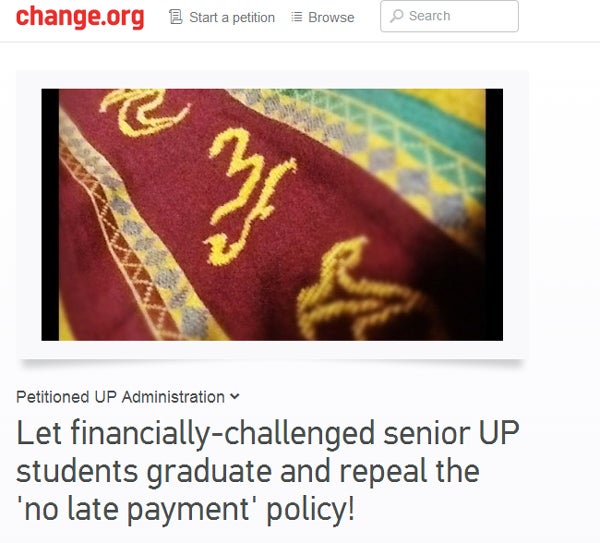 Cleve Arguelles’ wrote a petition in Change.org asking the UP administration to repeal its “no late payment” policy. Screengrab from Change.org.

MANILA, Philippines – The premier state school University of the Philippines (UP) on Wednesday said it is allowing four of its students in one campus to file for graduation despite their failure to pay tuition on time.

The UP system released its statement after news reports came out that its constituent UP Manila barred four students, including a former student representative, from graduating.

Former student regent Cleve Arguelles said in reports that the UP Manila administration would not allow them to settle their financial obligations due to their failure to meet the deadline of payment.

UP Manila made the move despite a new policy adopted in December 2013 that “no qualified UP student shall be denied access to UP education due to financial incapacity.”

In the statement, UP President Alfredo Pascual reminded UP officials to “be conscious of the spirit of the recently enacted amendments by the (Board of Regents).”

He also required officials “to assist students who are unable to pay their student loans for three successive semesters through scholarships, grant-in-aid, student assistantship or re-bracketing under (socialized tuition).”
The four students wrote a letter to Pascual, appealing that they be allowed to pay their tuition late so they could graduate in April.

The students also admitted that they did not avail themselves of the existing financial services such as loans, but they still appealed for consideration since they completed their requirements in their “desire to graduate.”

The university gave the students until April 4 to settle their dues.

In a post in Change.org, Arguelles “appeal(ed) to the sense of compassion and humanity of the UP administration” to allow them to pay late.

Arguelles said UP Manila rejected their plea as it may “set a precedent for future instances of late payment and violate the University’s ‘no late payment’ policy.”

“We believe that no graduating student should be barred from attending the commencement exercises solely for the reason of financial incapacity or failure to pay tuition on time,” he added.

The petition has gained 613 supporters as of posting time. One of the supporters is Christopher Tejada, the father of UP student Kristel who committed suicide last year supposedly due to tuition woes.

Tejada, 16, a Behavioral Sciences student in UP Manila, committed suicide in March last year allegedly due to financial difficulties that forced her to file a leave of absence. Her death sparked criticisms of the university’s “forced leave of absence” policy, which has since been junked.

For Kristel Tejada, studying was a coping mechanism

‘May the candle you lit up glow for a lifetime’