‘May the candle you lit up glow for a lifetime’ 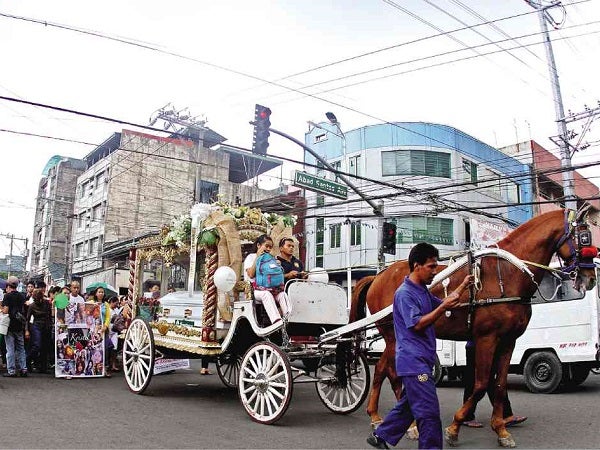 The funeral Mass for the cash-strapped University of the Philippines student who committed suicide saw the Catholic church launching a project that could hopefully prevent another Kristel Tejada.

Caritas Manila, the social services arm of the Manila Archdiocese, has put up an emergency fund with a seed money of P500,000 for state university students who need immediate financial assistance, according to the priest who officiated the final rites before Tejada was buried Saturday afternoon at North Cemetery.

“It’s a scandal in these modern times and in this supposedly growing economy to have such a tragedy because of failure to pay tuition,” Caritas executive director Fr. Anton Pascual said at Immaculate Conception Parish on Tayuman Street. 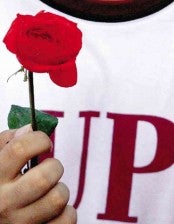 One of the mourners from her alma mater bids Kristel farewell with a rose. RICHARD REYES

May the death of the 16-year-old Behavioral Sciences freshman from UP Manila open the people’s eyes to their responsibility to one another as children of God, Pascual said.

The newly established emergency fund will be separate from Caritas’s regular scholarship program and will cater to needy students endorsed by their parish priests.

Its beneficiaries would be state university students faced with financial problems arising from their parents’ unemployment, sickness and other  domestic problems that could force them to drop out of school, Pascual explained.

The Mass gathered around 200 people, including members of the UP community and militant youth groups.

Speaking to reporters later, Pascual said the Church no longer withholds its blessings from persons who committed suicide, saying they are considered “not in an objective state of mind” due to depression.

The more they need compassion, something that should also be extended to their families who are traumatized by the tragedy, he said.

Kristel took her own life in her Tondo, Manila, residence on March 15 shortly after filing a leave of absence in the middle of the second semester for failure to settle her tuition loan in UP Manila, which was then imposing the so-called “no late payment” policy.

Her death triggered mass actions in UP and other schools as well as intense criticism online concerning the policy, which was eventually scrapped by school officials on March 19.

In her eulogy, Kristel’s mother Blesilda read out her daughter’s suicide letter, in which the eldest in a brood of four professed her love for her family but also apologized and asked for their prayers.

Kristel wrote of something she “could no longer bear” and of a time “we will all meet again.”

Blesilda said Kristel must have gotten tired of speaking without being heard and that her death brought about a kind of silence that her fellow students may now fill to air their own grievances.

“May the candle you lit up glow for a lifetime,” she said in Filipino.

In a statement released in time for Tejada’s burial, UP president Alfredo Pascual conceded that her death had “divided” the UP community.

But he said he remained confident that time would come when “no qualified student is denied education in UP because of financial reasons.”

“Soon we can claim that UP, the country’s national university, has indeed become the University of the People,” Pascual said. “Every young life lost is a lofty dream snuffed out.  For we see in our students—in each one of them—a bright ray of hope for the upliftment of our country and people.”

“I join the UP faculty, staff, and students, and her relatives and friends in deep prayer and mourning,” he said. “To Kristel’s family, I wish to offer my deepest condolences.” With a report from Kristine Felisse Mangunay