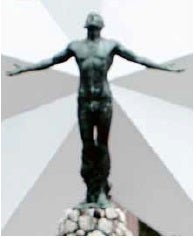 The Oblation: A symbol of UP’s aspirations for academic excellence and also a rallying point for student activism MARIANNE BERMUDEZ

MANILA, Philippines—A year after University of the Philippines (UP) Manila freshman Kristel Tejada killed herself over her family’s inability to pay her tuition, her father called the reforms undertaken since then by the university as “band-aid solutions.”

“They still do not solve the problem of education being beyond the reach of poor but deserving students,” Christopher Tejada said at a press conference in Quezon City yesterday.

While he was glad that many others have called for reforms in the UP tuition system following Kristel’s death, he expressed hope that she would not be forgotten eventually.

“Let us not close our eyes to the fact that an inefficient system is in place. I won’t let another Kristel die,” he said.

UP students and faculty members are expected to march to the Padre Faura campus in Manila today as part of the commemoration of her first death anniversary.

The 16-year-old freshman, the eldest in a brood of five, was taking up behavioral sciences in UP Manila when she took her own life by drinking poison on March 15 last year.

This was after she was forced to take a leave of absence from school when she failed to pay her tuition.

Following her death, UP president Alfredo Pascual declared that as an official policy, no qualified UP student would be denied access to education due to lack of money. This was followed by reforms in the UP tuition system earlier this year, including allowances for indigent students and a simpler application process.

Christopher, however, dismissed the changes as “mere band-aid solutions.”

“Are these solutions? This is UP, so education should be free. The time to fight the system is now. I’ve lost a daughter because of that,” he said.

Meanwhile, UP student regent Krista Melgarejo warned of another wave of tuition hikes under the new bracketing system.

Former faculty regent Dr. Judy Taguiwalo, on the other hand, said the government should channel its pork barrel fund to services such as education.

Christopher, a former taxi driver, now works for the Department of Public Services at Manila City Hall. He was given a job by then Mayor Alfredo Lim who took pity on him following Kristel’s death. His wife, Blesilda, stays at home with their four remaining children. The eldest is in high school, two others are in grade school while the youngest is 7 months old.

“We have a small business now but it is still not enough for us,” Christopher complained.

“A year may have passed by but the pain is permanent, it will never go away,” Christopher said.

The Inquirer tried to get a comment from Dr. Prospero de Vera, UP’s vice president for public affairs, but he could not be reached on his cell phone.

For Kristel Tejada, studying was a coping mechanism