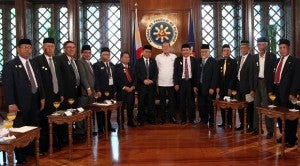 ILIGAN CITY, Philippines — The next president of the country must be able to nurture the gains of the peace process that the administration of President Benigno Aquino has achieved with Moro rebels to ensure continued security and stability in Mindanao.

The principal bargain for the MILF’s agreeing to end its four-decade rebellion against the Philippine state is the establishment of the Bangsamoro government, an autonomous entity with far greater political and economic governance powers than the current Autonomous Region in Muslim Mindanao (ARMM).

Based on an agreed roadmap, this entity must be fully entrenched by noon of June 30, 2016, the same day Aquino steps down from office.

To make this happen, Congress has to enact the Basic Law that will serve as charter of the future Bangsamoro, which will then be subjected to a plebiscite in the areas proposed to comprise its administrative territory.

Part of the deal is for it to decommission its own army alongside the pursuit of a host of complementary measures to normalize the situation in once conflict-affected communities.

Throughout the implementation of all agreed measures, the peace panels of both parties continue to exist to oversee the efforts while a third-party body, composed of a mix of international and domestic entities, monitor the actual achievement of the detailed milestones.

The peace panels are only disbanded once an Exit Agreement is forged between the parties, signaling the full implementation of their respective commitments as embodied in the CAB.

It said that to make the agreement truly work for attaining peace in Mindanao, the parties “must nurture” their partnership “through to the end.”

“Only two capable partners can ensure the success of their peace endeavor,” the group emphasized.

What is the Comprehensive Agreement on the Bangsamoro?