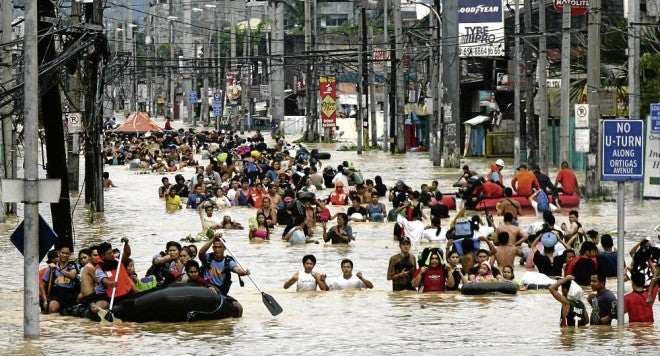 MANILA, Philippines— Lying smack in the middle of a fault-line and a typhoon path, Metro Manila is basically sitting on a ticking time bomb.

In a recent poll by Swiss Re, an international reinsurance company, Metro Manila is the world’s second riskiest ‘city’ in terms of natural disasters waiting to happen, behind only Tokyo-Yokohama in Japan.

The survey uses only the word “Manila”, which is just one of the cities in the Philippine capital. But citing the population of 34.6 million, the survey technically refers to Metro Manila.

Also called the National Capital Region, Metro Manila is composed of 15 cities and one municipality. They are the cities of Caloocan, Las Piñas, Makati, Malabon, Mandaluyong, Marikina, Muntinlupa, Navotas, Parañaque, Pasay, Pasig, Quezon, San Juan, Taguig and Valenzuela. Pateros is the only municipality. There are about 34.6 million residents as of 2013.

“Besides being exposed to frequent tropical cyclones and storm surges, many cities in the region are also located in zones of high seismic activity, including Tokyo, Taipei, and Manila,” Swiss Re said in a report.

Swiss Re based its findings on cities that are most susceptible to five natural disasters, earthquake, storm, storm surge, tsunami, and river flood.

According to Swiss Re, 34.6 million people are potentially on the receiving end of the five catastrophes.

“The vibrancy of these cities is a key driver for economic development,” Matthias Weber, Group Chief Underwriting Officer, said in the report. “However, the growing concentration of people, assets and infrastructure also means that the loss potential in urban areas is high and rising.”

Metro Manila, which has the Manila Bay on its west side, is very susceptible to flooding once the rainy season starts.

Rounding out the top ten riskiest cities were Tehran in Iran, Los Angeles in the United States, Shanghai River in China, Kolkata in India, Nagoya in Japan, Jakarta in Indonesia, Osaka-Kobe in Japan, and the Pearl River Delta in China.

In the crosshairs of the rankings, the region of Tokyo-Yokohama in Japan, Swiss Re said, is “by far the most earthquake exposed community” in the rankings with almost 30 million people potentially considered as victims.

It also tops the list in terms of the risk of a possible tsunami with 2.4 million people potentially affected.

As a region, the Pearl River Delta is comprised of the urban districts of Hong Kong, Shenzen, Dongguan, Macau, and Guangzhou, and is one of China’s main economic centers.

According to Swiss Re, the Pearl River Delta is highly susceptible to typhoon-related storm hazards, river and coastal flood zones and earthquakes.

Japan’s Osaka-Kobe region, according to the report, has 32.1 million people who are potential victims of the calamities and Jakarta has a potential of 27.7 million victims.

Osaka-Kobe, the report said, has a high risk of experiencing storm surges as its metropolitan areas were developed on large coastal plains.

In terms of the number of potential victims the rest of the rankings are Nagoya with 22.9 million, Kolkata with 17.9 million, Shanghai with 16.7 million, Los Angeles with 16.4, and Tehran with 15.6 million.