Typhoon ‘Yolanda,’ one of the strongest typhoons on record struck the Philippines, forcing hundreds of thousands from their homes and knocking out power and communications in several provinces. But the nation appeared to avoid a major disaster because the rapidly moving typhoon blew away before wreaking more damage, officials said.

Typhoon “Yolanda” (international name: Haiyan) left the Philippines early Saturday on a path toward Southeast Asia, the U.S. National Oceanic and Atmospheric Administration tweeted. Forecasters said the storm was expected to pick up renewed strength over the South China Sea on its way toward Vietnam.

As of 11am, over 100 people are feared dead in the wake of “Yolanda’s” destruction, according to Capt. John Andrews, deputy director general of the Civil Aviation Authority of the Philippines.

Nearly 750,000 people were forced to flee their homes.

Weather officials said ‘Yolanda’ had sustained winds of 235 kph (147 mph) with gusts of 275 kph (170 mph) when it made landfall. By those measurements, ‘Yolanda’ would be comparable to a strong Category 4 hurricane in the U.S., nearly in the top category, a 5.

Hurricanes, cyclones and typhoons are the same thing. They are just called different names in different parts of the world.

Because of cut-off communications in the Philippines, it was impossible to know the full extent of casualties and damage. At least two people were electrocuted in storm-related accidents, one person was killed by a fallen tree and another was struck by lightning, official reports said.

The dense clouds and heavy rains made the day seem almost as dark as night, he said.

“When you’re faced with such a scenario, you can only pray, and pray and pray,” Mercado told The Associated Press by telephone, adding that mayors in the province had not called in to report any major damage.

“I hope that means they were spared and not the other way around,” he said. “My worst fear is there will be massive loss of lives and property.”

Eduardo del Rosario, head of the disaster response agency, said the speed at which the typhoon sliced through the central islands — 40 kph (25 mph) — helped prevent its 600-kilometer (375-mile) band of rain clouds from dumping enough of their load to overflow waterways. Flooding from heavy rains is often the main cause of deaths from typhoons.

“It has helped that the typhoon blew very fast in terms of preventing lots of casualties,” regional military commander Lt. Gen. Roy Deveraturda said. He said the massive evacuation of villagers before the storm also saved many lives.

The Philippines, which is hit by about 20 typhoons and storms a year, has in recent years become more serious about preparations to reduce deaths. Public service announcements are frequent, as are warnings by the president and high-ranking officials that are regularly carried on radio and TV and social networking sites. 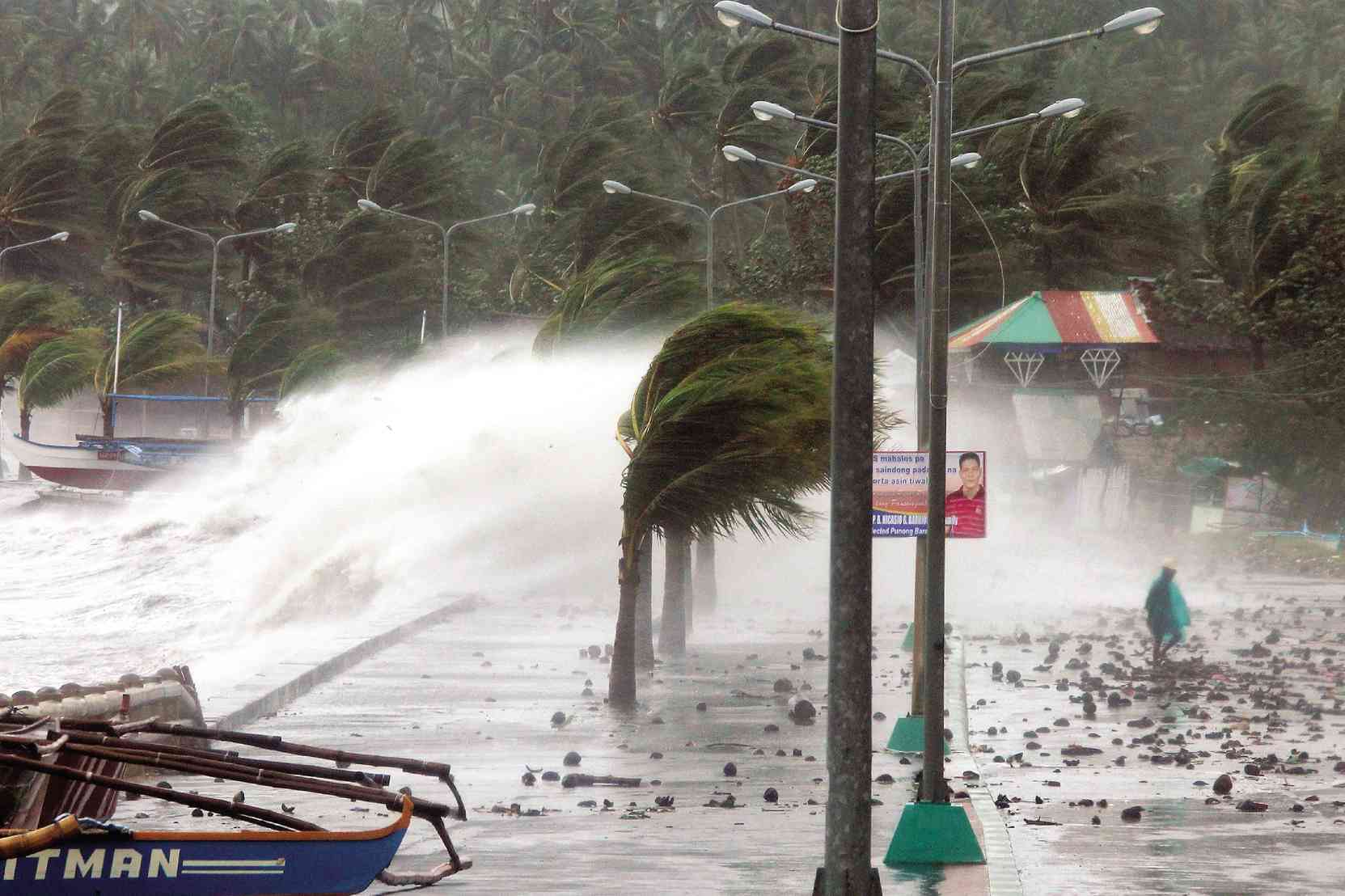 Among the evacuees were thousands of residents of Bohol who had been camped in tents and other makeshift shelters since a magnitude-7.2 earthquake hit the island province last month. 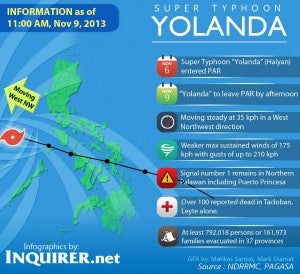 Relief workers said they were struggling to find ways to deliver food and other supplies, with roads blocked by landslides and fallen trees.

World weather experts were calling the typhoon one of the strongest tropical cyclones on record at the time it hit land, but not quite the windiest. There were disputes over just how strong it is because of differences in the way storms are measured.

“In terms of the world I don’t think it’s the strongest,” said Taoyang Peng, a tropical cyclone scientist at the World Meteorological Organization in Geneva. But he added that “it is one of the strongest typhoons to make landfall” and probably the strongest to hit the Philippines.

The U.S. Joint Typhoon Warning Center put Haiyan’s sustained winds at 315 kph (196 mph) just minutes before it made landfall Thursday, which would be a world record. However, officials in Tokyo and the Philippines but the wind speed at about 235 kph (147 mph).

Peng said his group considers Tokyo the authority in this case because it’s the closest regional center to the storm.

The best way to measure a storm is with radar from a plane flying in and out of it. That’s not done in Asia, where they use satellite imagery and ground measurements instead.

Not until meteorologists can conduct a deep investigation will scientists know just how strong Haiyan actually was, but it will easily be one of the strongest on record, former U.S. National Hurricane Center director Max Mayfield told the AP on Friday.

‘Yolanda’ weakens, on way out of PH