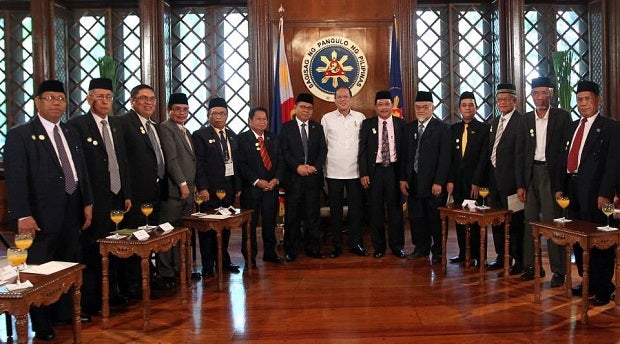 MANILA, Philippines – The program for the signing of the Comprehensive Agreement on the Bangsamoro (CAB) kicked off past 4 p.m. Thursday at Malacañang Palace.

As of posting time, Secretary Teresita Quintos-Deles, Presidential Adviser on the Peace Process, was delivering a speech.

Meanwhile, simultaneous activities were being held in various parts of Mindanao. In Cotabato City, people launched a peace rally at the Shariff Kabunsuan Cultural Complex while the ARMM had its own “Peacetahan” festival, Communications Secretary Herminio Coloma said. Similar events were held in Marawi City, General Santos and Maguindanao.

The signing of the CAB marks the culmination of the 17 years of peace negotiations between the two parties and the supposed end to decades of armed conflict in Mindanao. It will pave the way for a new Bangsamoro autonomous political entity that will replace the Autonomous Region in Muslim Mindanao and will address various issues in the area such as poverty.

The agreement has been lauded by many local and foreign groups.

Ferrer called it the country’s “global contribution to the pursuit of peace.”

“Many other countries [that] face similar troubles are looking up to us to show the way or possible modalities by which they can also address their own domestic conflicts. Our experience, our mechanisms, our approaches have become a rich source of inspiration to these countries that remain challenged by different sources of domestic hostility,” she said on Tuesday.