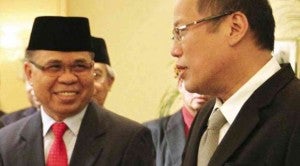 The Department of Foreign Affairs also confirmed the attendance of Prime Minister Najib Razak of Malaysia, the third party facilitator of the peace talks.

“We are now finalizing the preparations for the signing, which will be at 4:00 p.m. on the Malacañang grounds to be witnessed by many people who have been involved in the peace process, as well as stakeholders, representatives of stakeholders not just in the Bangsamoro but all over the country, as well as the friends of the peace process from abroad,” Deles said in a Palace press briefing.

GPH Peace Panel chair Miriam Coronel Ferrer said the five-page, 12-point text document will include pertinent details on the Framework Agreement on the Bangsamoro, its four succeeding annexes, the ceasefire agreement of 1997, the agreement on peace signed in Tripoli in 2001 and the 2010 declaration of continuity of negotiations.

Ferrer said the CAB is the Philippines’ “global contribution to the pursuit of peace.”

“Many other countries [that] face similar troubles are looking up to us to show the way or possible modalities by which they can also address their own domestic conflicts. Our experience, our mechanisms, our approaches have become a rich source of inspiration to these countries that remain challenged by different sources of domestic hostility,” she said.

Hundreds invited to signing of Bangsamoro accord