Yolanda survivors: Life in the shadow of giant ships 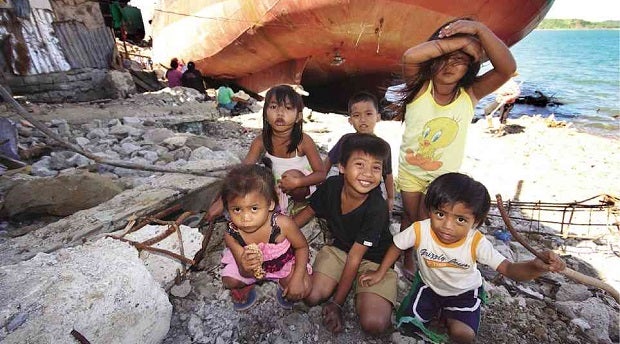 BEACHFRONT PLAYGROUND. Anton Cuenca (center) and his friends pose in front of the hulking stern of the cargo ship MV David, one of 10 ships still grounded in Anibong district in Tacloban City. DANNY PETILLA/CONTRIBUTOR

TACLOBAN CITY—“It am amyaw barko! (Our neighbor is a boat!)”

This is how 8-year-old Anton Cuenca describes his family’s present predicament: They have been forced to live beside a 1,000-ton cargo ship that swept ashore and squashed their house as a result of the cataclysmic storm surges whipped up by Supertyphoon “Yolanda” last Nov. 8.

Anton’s matter-of-fact observation may have been shared by the other 1,200 residents of Barangay 69 in Anibong district here, where a surreal scene plays out every day since Yolanda struck.

A community of mostly poor fishermen and laborers ekes out a living of sorts in the shadow of these large ships, whose huge hulls dwarf the residents’ crudely built shacks below.

Along this 1-kilometer stretch of coastline is Exhibit A of Yolanda’s unprecedented fury, and how it turned this once-bustling coastal village into a virtual parking lot for 10 big ships scattered along the coast in different stages of disarray like downed, oversized tenpins.

“A stark reminder of just how powerful Yolanda was,” said Lt. Paul C. Gonzales, the 31-year-old station commander of the Tacloban Coast Guard. With the help of private salvage operators, Gonzales is moving heaven and earth to remove the errant ships off the land.

But around these jumble of behemoths facing the Cancabato Bay is also the playground for Anton and his two sisters, Sheila Mae, 5, and Alyana, 3, and several of their friends. The children, all Yolanda survivors, enjoy endless bouts of their favorite game of Chinese garter behind the shadow of the massive hull of MV David, a cargo ship owned by Candano Shipping Lines of Tabaco, Albay province. Part of the ship’s stern almost touches the roof of aluminum, plastic and cardboard boxes that shelters Anton and his family from the elements.

For the three children and their circle of friends, the ship is also hallowed ground. Their beloved 3-year-old neighbor and playmate Dane Nathaniel Yadawon died here, just one of Yolanda’s hundreds of child victims. He was found inside MV David’s storage a day after the typhoon. Two of every five corpses found here were children, according to the Office of Civil Defense (OCD).

“Dane looked like he was alive. But he was not breathing anymore,” Alyana said.

“We saw a lot of dead people. I was scared of the bones,” Sheila Mae said.

“It was like war. The sounds that we heard were scary,” Anton recounted.

Anton, Sheila Mae and Alyana are the children of Alan Cuenca, a 45-year-old unemployed truck driver and his 43-year-old wife, Catalina, a former overseas domestic helper. Their brick-and-mortar two-story house by the sea was crushed to pieces when the MV David carrying 32,000 sacks of cement ran aground.

The family survived because they evacuated early, seeking higher ground on a hilltop, but not before they had a scare. They nearly lost Alyana who would have drowned if not for Crispin Arcoles, a 21-year-old gay neighbor who saved her from the rising floodwaters.

“That house was the product of my sweat and blood, of working six hard years in Saudi Arabia and Singapore,” Catalina said.

To be sure, the Cuenca family’s post-Yolanda odyssey has gone full circle, starting when MV David destroyed their house, followed by their mad rush out of Tacloban to join the hellish exodus a few days after the storm, and ending when they returned home on Jan. 3, after weeks of despair and frustration in Manila.

“There was nothing for us there (Manila). We had to come back,” Catalina said. She said she took in laundry for a month to save money for the family’s bus fare to Tacloban. When they returned, Alan built a crude one-room shack made of materials he rummaged from the rubble around them. He built it on the exact spot where their house had stood.

“My neighbors helped me build this house, with the good, old Filipino bayanihan spirit,” Alan said.

Despite this, there is much tension and anxiety in the Cuenca household and that of their neighbors. The government’s no-build zone policy, outlawing any rebuilding here, hangs over their heads like a sword of Damocles.

The government tightened the screws further by cutting water and power service to the village.

“What can we do? We have to obey the law,” said Nestor Villasin, general manager of the Leyte Metropolitan Water District (LMWD) who authorized the cutting of water service.

Catalina said they had to fetch water from a public faucet several blocks away. They have no electricity but a cheap solar lamp, which they charge in the daytime, that provide ample light for the solitary room they all call home at night.

Alan said the government had informed them that they would be relocated to New Kawayan, a barangay close to San Juanico Bridge, 6 kilometers away. “What will we do there? Our livelihoods are here,” he said.

“No-Build-Zone” is a phrase Anton and his sisters hardly understand. But their father explained to them in painstaking detail how they would have to live somewhere else because the government wanted them to be safe when another typhoon came.

The threat of relocation and the uncertainty facing his family make Anton very worried. Catalina said her children were plagued by nightmares.

“Anton was a slow learner before Yolanda. He is even a slower learner now,” added Abril, 49, an elementary teacher here for the past 26 years.

Abril’s assessment of Anton has alarmed Catalina, who had stopped working abroad so she could take care of her three children full-time.

“My children have been through a lot, but at least they are playing and smiling again,” Catalina said, as she discounted any telltale trauma from Yolanda.

One recent Saturday afternoon, Anton and his sisters, joined by their best friends, were playing outside under a wide shadow cast by the large stern of MV David, protecting them from the sun.

Amid the shrieks of joy and delight from Anton and his friends, their parents discussed the no-build threat and pondered their next move. Suddenly, Catalina realized they still had nothing for dinner, and the no-build menace was instantly shelved.

“Right now, we need to eat. I’ll think about that (no-build decree) tomorrow,” she said.

“We survived Yolanda. We can survive anything,” Alan said.

Meanwhile, Anton and his sisters continued to play outside, oblivious of what was going on inside their house.

“If we go away, I will miss this boat,” said Anton, casting a look at his hulking neighbor.

Corpses still being found in Tacloban 4 months after ‘Yolanda’