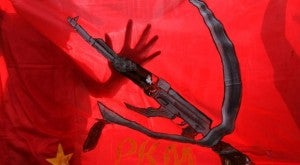 Benito Tiamzon, the head of the Communist Party of the Philippines (CPP) and its armed wing, the New People’s Army (NPA), and six other members of the CPP central committee were arrested on Saturday in Carcar City, south of Cebu City.

One of those arrested was Wilma, Tiamzon’s wife, who is also a top-ranked central committee member and the CPP finance officer.

“Yes, Benito and Wilma Tiamzon have been arrested. This is an Army project,” Gazmin said.

“They are now undergoing tactical interrogation,” he added.

A high-ranking military source said Tiamzon’s arrest would be a “big blow to them [the communist rebels] as he is the chair of the CPP-NPA.”

Finding the Tiamzons was “a long operation,” he said.

All seven suspects were members of the CPP central committee, he said. The five others arrested were not identified.

They were riding in two vehicles, a Starex van and a Toyota Innova, when they were arrested at about 3:15 p.m. in Barangay Aloguinsan, Carcar City, sources said.

The group was brought to the Armed Forces Central Command for tactical interrogation, the sources said.

They did not resist arrest, the source said.

Saturday was the 117th anniversary of the Philippine Army, which has been at the forefront of the war against the communist insurgency for more than 40 years.

All of the country’s high-ranking security officials, led by Gazmin and Armed Forces Chief Gen. Emmanuel Bautista, were in attendance at the anniversary celebrations held early Saturday at Fort Bonifacio.

In his speech, Army Chief Maj. Gen. Hernando Iriberri referred to the significant gains that the Army has made in internal security operations.

Little did everyone know—or it could be that top security officials were simply being tight-lipped—that the government would catch the two biggest fish of the communist insurgent movement.

In August 2012, Mr. Aquino reiterated that the bounty for the capture of Tiamzon still stood at P5.6 million.

According to intelligence sources, Tiamzon and his wife Wilma are now the ones “in charge” in the communist hierarchy.

The couple has long been considered more influential than Jose Ma. Sison, the founder of the CPP and its political arm, the National Democratic Front, who lives in exile in the Netherlands.

Reports as of November 2012 described Tiamzon as the “top New People’s Army leader” while his wife Wilma was described as the “head of the CPP’s national finance commission.”

Tiamzon, along with another communist guerrilla leader Jorge Madlos, has a standing arrest warrant for alleged involvement in violent incidents, including attacks on civilian targets.

Read Next
Yolanda survivors: Life in the shadow of giant ships
EDITORS' PICK
New Year, New Rediscoveries
Acer Philippines welcomes you to its first flagship store
Is your company a growth champion? Stand up and be recognized!
4 senators want military, cops off UP campuses
PUP accord with DND also faces termination
Joe Biden sworn in as 46th U.S. president, urges end to ‘uncivil war’
MOST READ
Trump’s parting gifts to Biden: Roaring stocks, a weaker dollar, tons of debt
Biden says Trump wrote him ‘very generous letter’
Dacera case: Sinas orders relief of Makati’s top cop, medicolegal officer
A shade at Roque? Vice asserts being a comedian, not a clown
Don't miss out on the latest news and information.