MANILA, Philippines—Defense Secretary Voltaire Gazmin on Saturday night confirmed the arrest of Benito Tiamzon, chairman of the Communist Party of the Philippines (CPP) and its armed wing, the New People’s Army (NPA) in Cebu province. 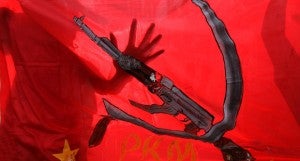 Tiamzon was arrested with his wife Wilma and five other members of the central committee of the CPP-NPA.

Wilma Tiamzon is the secretary general of the CPP-NPA.

“This is a report given to me by the AFP (Armed Forces of the Philippines). Yes, [arrested were] Benito and Wilma Tiamzon,” Gazmin told the Inquirer by phone.

The arrest of the Tiamzons happened exactly a week before the 45th anniversary of the CPP-NPA on March 29.

A few days ago, President Benigno Aquino said that a “big fish” would soon be arrested that would surprise everybody.

Asked if the President was referring to the Tiamzons, Gazmin said: “I don’t know. I guess so. They are a big fish.”

Gazmin said the arrest of the Tiamzons and the members of the Central Committee was “bigger than (retired general Jovito) Palparan” because they are the leaders of the NPA rebels the military has been fighting for more than 40 years.

Gazmin said the military is expecting retaliation by the communist rebels for their leaders’ arrest but that the AFP “will prepare for that.”

Gazmin said the arrest of the Tiamzons was an “Army project” and he also congratulated the AFP for its accomplishment.

“The arrest of Benito and Wilma Tiamzon is another victory for the combined efforts of between the AFP, PNP and other stakeholders in pursuit of peace and security. We will then continue to strengthen our resolve to bring other criminals to justice in honor of the victims of the violence perpetrated by the CPP-NPA and in honor of our people who deserve to live in a peaceful and developed society,” said AFP chief of staff Gen. Emmanuel Bautista in a statement.

Bautista called on the “rest of the CPP-NPA members to lay down their arms, abandon the armed struggle and return to the comforts of their families and join us in bringing peace and development to our nation.”

Bautista said the Tiamzons and their companions were arrested in Brgy. Zaragosa, Alunginsan, Cebu.

They were arrested by virtue of a warrant of arrest for their crimes against humanity that include multiple murders and frustrated murder.

“They are currently undergoing processing and documentation for legal disposition,” Bautista said.