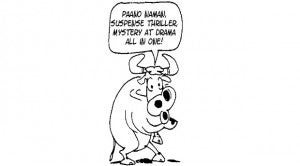 The network devoted the bulk of its time on Friday to the story, a direct result of ratings showing a fascination among viewers about the Boeing 777 airliner that has been missing since taking off from a Kuala Lumpur airport a week ago.

Anderson Cooper’s prime-time show, which has focused heavily on the mystery, more than doubled its typical viewership the last two nights and topped

The network tracked various theories on Friday, a headline on its screen identifying the story as “Vanished.”

Correspondent Martin Savidge did several reports from a cockpit simulator, Wolf Blitzer discussed whether the recording of a seismic event in the region on the day the plane took off could be tied to a crash and security experts continued to mull potential terrorism.

It has become a water cooler topic, with several social media references to the downed jet that kicked off the popular television series “Lost.”

On both of the last two nights, Cooper achieved the highly unusual feat of topping Fox News Channel’s Bill O’Reilly among the 25- to 54-year-old age demographic.

O’Reilly easily won among viewers of all ages.

So far, the plane story has meant less for Fox and MSNBC, which have a heavier concentration on political stories.

Fox’s full-day average of 1.26 million people on Thursday beat the 1.1 million it has been typically drawing this year.