Issues raised over US troops’ return to PH 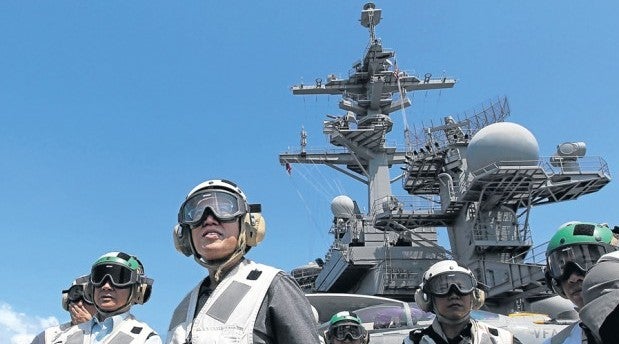 Even before a final deal is concluded on a new agreement that will allow increased US military access to the country, the issues of constitutionality, Senate concurrence and Philippine control over areas of American presence have begun to be articulated inside and outside Congress.

Perennial gadfly Senator Miriam Defensor-Santiago this early is insisting that US access to Philippine bases under a new regime of expanded US military presence in the country will have to be covered by a treaty that will be scrutinized and concurred in by the Senate.

The deployment of US military hardware in Philippine territory isn’t a minor detail that may be covered by an executive agreement as the Department of National Defense claims, said Santiago, an international law expert who chairs the Senate committee on foreign relations.

Not a minor detail

“[But] posting the war equipment of a foreign sovereign state is not a minor case of detail, you know,” Santiago told reporters on Friday.

“It is a major subject in itself so it (the new agreement) cannot be classified as an executive agreement but as a treaty to which the Philippine Senate must give its concurrence,” she said.

Defense and diplomatic officials on Friday said the Philippines had offered access to local military bases to the United States under a new security deal that was in the final stages of negotiation.

The offer was made during the sixth round of talks held in Washington, DC, last week on an “Agreement on Enhanced Defense Cooperation” that will allow increased US military presence in the country, more than two decades after the US gave up its military bases here following a Senate vote not to renew their leases and the eruption of Mt. Pinatubo in 1991.

The two sides hope to finalize the terms of the new agreement before US President Barack Obama embarks on a visit to Asia, including the Philippines, next month.

The Philippines is seeking a stronger defense cooperation with the US as its territorial dispute with China over areas of the South China Sea intensifies, while the US is “rebalancing” its forces in the Asia-Pacific region as part of its strategy to counter Chinese power.

Muntinlupa Representative Rodolfo Biazon, a former Armed Forces chief who chairs the House of Representatives’ national defense committee, said one of the main points of contention, once the deal is finalized, could center on who would control the areas where the US forces would be allowed to stay.

Biazon noted that at present, the US forces that are in the country under the Visiting Forces Agreement have mobile facilities inside the Philippine bases, and these are in Filipino-controlled territories where Filipino rules and regulations are enforced.

According to Biazon, whatever form the agreement would take, whether an executive agreement or a treaty, it will have to go through Senate ratification under three conditions—if it is political in nature, if it is permanent in nature, and if it requires a change in some of the country’s national policies.

The Constitution prohibits foreign bases on Philippine territory, unless provided for by a treaty approved by the Senate.

A defense official has said the “Agreement on Enhanced Defense Cooperation” between the Philippines and the United States would not require Senate ratification.

Santiago said she expected the Senate to insist on its authority to review and to concur with treaties entered into by the President.

“The Senate is going to scream because we always fight for our power to concur with any ratification made by the President. That will become a constitutional issue that case will automatically be elevated to the Supreme Court,” she said.

“It’s much better to have the Senate concur with his ratification if he (the President) ratifies. And besides, we have jurisprudence that a treaty is different from an executive agreement in this sense,” Santiago added.

A lawyers’ group said the government’s offer to the US of access to local military bases was “presumptively unconstitutional.”

“If formalized into another onerous document, this plainly and virtually amounts to having US bases right smack into the lapdog’s own doghouse,” the National Union of Peoples’ Lawyers said in a statement.

The government is apparently trying to circumvent the constitutional prohibition against foreign bases, and, in the process, is leading the way to surrendering the country’s sovereignty and allowing contempt for legal processes and jurisdiction, the NUPL said.

The group is concerned that “US troops in the country would become involved in overt combat and direct command and would be virtually based here.”

Return to US colony status

Militant partylist lawmakers said the enhanced defense cooperation agreement, along with a Charter change proposal to allow Congress to open up the economy to foreigners, would turn the Philippines into a US colony again.

They also said that inviting more US troops to the Philippines would bring more harm than good because these soldiers would be targeted by the United States’ enemies, and the Philippines is bound by the Mutual Defense Treaty to help them.

“The presence of US troops here will increase the tension in the region and threaten its stability,” Bayan Muna Rep. Neri Colmenares said.

Colmenares also said there were other ways that the Philippines could take to defend itself against China’s bullying over a territorial dispute.

It can just continue seeking help from the international community, he pointed out.

“We will win the cases we filed against China under the Unclos (United Nations Convention on the Law of the Sea) because China has no evidence to back up its territorial claim. This is the more powerful and peaceful way of dealing with China,” he said.

No need for ratification

Meanwhile, Malacañang on Saturday maintained that the new security agreement with the US would not need Senate concurrence.

“It is the Philippine panel’s position that the Agreement on Enhanced Defense Cooperation merely implements the general provisions of the Mutual Defense Treaty (e.g., development of the parties’ collective capacity of attack) and the Visiting Forces Agreement (e.g. consent of US troops to visit the Philippines),” said Benjamin Caguioa,  chief presidential legal counsel.

Caguioa said these two treaties had been concurred in by the Senate in separate instances, “thus there is no need for the Senate ratification for this implementing agreement on Enhanced Defense Cooperation.”

Senator Antonio Trillanes IV, an administration ally, said he agreed with the government’s position that the new deal could come in the form of an executive agreement that would not need Senate concurrence.

“I believe that it is the prerogative of the executive branch to enter into an executive agreement with the United States within the purview of existing treaties like the Mutual Defense Treaty and the Visiting Forces Agreement,” said the former junior Navy officer who chairs the Senate committee on national defense.

Trillanes said there should be increased US presence even without the regional security considerations in the West Philippine Sea as joint exercises between Philippine and US forces had greatly benefited the Philippine military.

“Our principal purpose for this should be whether it will benefit our Armed Forces and our country, independent of any other development in regional security and so forth,” he said.

“So with or without these regional security considerations, this agreement should push through,” Trillanes said.

Deputy presidential spokesperson Abigail Valte denied that the final negotiations for the agreement were being rushed so it could be signed during the visit of Obama here next month.

“If this can be concluded before the visit of President Obama, that would be OK. If not, what is important is to iron out all the details,” she said.

“What the President wants is clear and unambiguous provisions, and that the language of the agreement should be certain,” she said. With a report by Michael Lim Ubac

Palace: No need for Senate to ratify new US defense deal

PH turning into US colony amid Charter change, US presence talks–solons

PH offers US use of bases