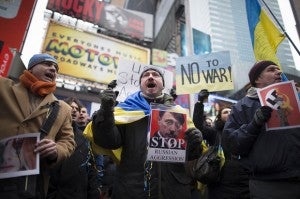 DONETSK – Pro-Russian activists rallied in the eastern heartland of Ukraine’s ousted leader on Saturday after Moscow threatened to cut off gas to its ex-Soviet neighbour following its tilt toward the West.

Rallies in industrial cities that rely on Russia for trade and whose cultural roots lie closer to Moscow than Kiev come as Kremlin-backed troops tighten their grip on the flashpoint peninsula of Crimea.

The predominantly Russian-speaking southern and eastern swathes of Ukraine have been in upheaval since three months of deadly protests brought new pro-European leaders to power in Kiev whom they view with disdain and mistrust.

The Kremlin says the new rulers have fomented a lawless atmosphere of intimidation against ethnic Russians that President Vladimir Putin says prompted him to threaten to use force in Ukraine – a shock decision that has sparked the worst East-West standoff since the Cold War.

Now activists who have set up a round-the-clock picket on Donetsk’s central Lenin Square under a red Soviet flag with the golden hammer and sickle are calling for a secession referendum just like the one planned in Crimea on March 16.

“Only Russia can help us so that our rights are not dragged through the mud!” said one protester named Natalia who works at a local beauty salon in the eastern city.

“There needs to be a referendum,” she said.

Similar protests have hit nearby Russian-speaking cities such as Kharkiv and Dnipropetrovsk.

The imposing Donetsk city adminstration building has flown both Russian and Ukrainian flags after being repeatedly raided in the past week by irate protesters from both sides. The city was the regional stronghold of deposed president Viktor Yanukovych, who fled to Russia late last month.

Russia says it has stepped up protection of its Black Sea Fleet base in Crimea and is working together with local self-defense militias but refuses to acknowledge it has deployed extra troops to the peninsula.

Ukrainian border guard general Mykola Kovil said Friday there were now 30,000 Russian troops in Crimea – higher than the 25,000 allowed under an existing agreement with Ukraine.

Successive attempts by 47 unarmed military and civilian observers from the Organization from Security and Co-operation in Europe (OSE) to verify what is actually happening in Crimea came to nothing after gunmen blocked their entrance from the Ukrainian mainland.

Moscow blamed the OSCE on Friday for trying to enter Crimea “without considering the opinions and recommendations of the Russian side” despite a push by US President Barack Obama for monitors to be let through as part of an “off-ramp” to de-escalate the crisis.

Russia’s decision to flex its military muscle for the first time since it waged a brief war with Georgia in 2008 has prompted Washington to slap visa bans and asset freezes on top Moscow officials involved.

The European Union has also threatened to toughen economic sanctions against Russia should it fail to immediately open talks with Ukraine.

But Russian Foreign Minister Sergei Lavrov told US Secretary of State John Kerry that any punitive measures against Moscow would strike back like a “boomerang” against Washington.

The foreign ministry also warned EU powers that sanctions were a double-edged sword that could hurt Russia’s trading partners.

Those warnings became more concrete on Friday when the state-run energy giant Gazprom told Ukraine it may have to cut off the gas shipments on which its economy relies for the first time since 2009.

The halt – ostensibly over debts that the economically struggling nation has been running for years – would almost certainly affect Gazprom’s Western European clients such as Germany and only further damage the Kremlin’s reputation.

But Russia’s largest company is often accused of being wielded as a weapon by the Kremlin against uncooperative neighbouring nations that are thinking of breaking ties with Moscow – and consequently Putin’s dream of building post-Soviet military and economic alliances to rival the NATO and EU blocs.

Obama has twice telephoned Putin in the past week to try and nudge him to open talks with Ukrainian leaders that could avoid an all-out confrontation on Europe’s eastern edge with unimaginable consequences for global security.

But Putin has refused to recognize the legitimacy of interim President Oleksandr Turchynov and is clearly smarting from the downfall of Yanukovych – an ally who sparked protests that claimed some 100 lives after he ditched an historic EU pact in November in favour of closer ties with Russia.

Yanukovych’s February 22 ouster by lawmakers came one day after he grudgingly signed an internationally mediated agreement calling for snap presidential elections and ceding much of his authority to his parliamentary foes.

Putin’s spokesman Dmitry Peskov on Friday openly ridiculed Western calls for the Kremlin to launch negotiations with Turchynov with the help of foreign intermediaries.

“It is very curious that now, in Europe, we hear calls from Europe for Russia – with the help of Western nations – to negotiate with people from Kiev who call themselves the legitimate authorities of Ukraine,” Peskov told Russian state television.

“One can only smile at that, because of course, the creditworthiness of these so-called (foreign) guarantees expired after we saw what happened with the document that Yanukovych signed,” Putin’s spokesman said.

The comments and Gazprom’s threat against Ukraine were followed by another urgent phone call by Obama – on vacation in the US southern state of Florida – to German Chancellor Angela Merkel aimed at bridging Washington’s firm position on Russian sanctions with Western Europe’s softer stance.

The White House said Obama hailed the two sides’ “unified position” on the standoff but provided few details on sanctions.

“The leaders reiterated their grave concern over Russia’s clear violation of international law through its military intervention in Ukraine,” the White House said.

Putin: Russia has right to use force in Ukraine