Putin: Russia has right to use force in Ukraine 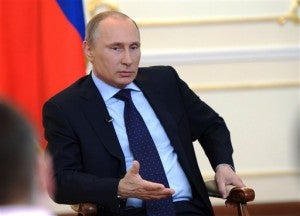 MOSCOW — Accusing the West of encouraging an “unconstitutional coup” in Ukraine, Vladimir Putin said Tuesday that Moscow reserves the right to use its military to protect Russians there but voiced hope it won’t need to do so. The Russian leader’s first comments on Ukraine since its fugitive president fled to Russia came just as U.S. Secretary of State John Kerry arrived in Kiev to meet with Ukraine’s new government.

Putin declared that Western actions were driving Ukraine into anarchy and warned that any sanctions the West places on Russia for its actions in Ukraine will backfire. Both the U.S. and the 28-nation European Union have raised the possibility of sanctions against Russia.

The U.S. government, meanwhile, announced an aid package Tuesday of $1 billion in energy subsidies to Ukraine, which is scrambling to get international loans to fend off looming bankruptcy. It’s finance minister says Ukraine needs $35 billion to get through this year and next.

Tensions remained high Tuesday in Crimea, with troops loyal to Moscow firing warning shots to ward off protesting Ukrainian soldiers. Russia took over the peninsula on Saturday, placing its troops around the peninsula’s ferry, military bases and border posts.

Yet world markets seemed to recover from their fright over the situation in Ukraine, clawing back a large chunk of Monday’s stock losses, while oil, gold, wheat and the Japanese yen gave back some of their gains.

“Confidence in equity markets has been restored as the standoff between Ukraine and Russia is no longer on red alert,” David Madden, market analyst at IG, said Tuesday.

Speaking from his residence outside Moscow, Putin said he still considers Viktor Yanukovych to be Ukraine’s president and hopes that Russia won’t need to use force in predominantly Russian-speaking eastern Ukraine.

“We aren’t going to fight the Ukrainian people,” Putin said, adding that the massive military maneuvers Russia has been doing had been planned earlier and were unrelated to the situation in Ukraine.

Putin also insisted that the Russian military deployment in Ukraine’s strategic peninsula of Crimea has remained within the limits set by a bilateral agreement on a Russian military base there. He said Russia has no intentions of annexing Crimea, but insisted its residents have the right to determine the region’s status in a referendum set for later this month.

Earlier Tuesday, the Kremlin said Putin had ordered tens of thousands of Russian troops participating in military exercises near Ukraine’s border to return to their bases. The massive military exercise in western Russia involving 150,000 troops, hundreds of tanks and dozens of aircraft was supposed to wrap up anyway, so it was not clear if Putin’s move was an attempt to heed the West’s call to de-escalate the crisis.

Putin accused the West of using Yanukovych’s decision in November to ditch a pact with the EU in favor of closer ties with Russia to encourage the months of protests that drove him from power and put Ukraine’s future in turmoil.

“We have told them a thousand times: Why are you splitting the country?” he said.

Yet he acknowledged that Yanukovych has no political future and said Russia gave him shelter only to save his life. Ukraine’s new government wants to put the fugitive leader on trial for the deaths of over 80 people during protests last month in Kiev.

Ukraine’s dire finances have been a key issue in the protests that drove Yanukovych from power.

On Tuesday, Russia’s state-controlled natural gas giant Gazprom said it will cancel a price discount on gas it sells to Ukraine. Russia had offered the discount in December following Yanukovych’s decision to ditch a pact with the EU. Gazprom also said Ukraine owes it $1.5 billion.

The new Ukrainian leadership in Kiev, which Putin does not recognize, has accused Moscow of a military invasion in Crimea.

On Tuesday, pro-Russian troops who had taken control of the Belbek air base in Crimea fired warning shots into the air as around 300 Ukrainian soldiers, who previously manned the airfield, demanded their jobs back.

About a dozen soldiers at the base warned the Ukrainians, who were marching unarmed, not to approach. They fired several warning shots into the air and said they would shoot the Ukrainians if they continued to march toward them.

Ukrainians said the troops that have overtaken Belbek and other Ukrainian military bases across Crimea, but Putin denied it, saying they were self-defense forces answering the pro-Russian regional government.

Ukraine has accused Russia of violating a bilateral agreement on conditions of a Russian lease of a naval base in Crimea that restricts troop movements, a charge Russia denies.

At the United Nations in New York, Russia’s ambassador to the U.N., Vitaly Churkin, said Monday that Russia was entitled to deploy up to 25,000 troops in Crimea under the agreement. Churkin didn’t specify how many Russian troops are now stationed in Crimea, but said “they are acting in a way they consider necessary to protect their facilities and prevent extremist actions.”

Russia is demanding the implementation of a Western-sponsored peace deal that Yanukovych signed with the opposition last month that set a new presidential election no later than December. The Russian envoy at those talks did not sign the deal. Yanukovych fled the capital hours after signing the deal and ended up in Russia, and the Ukrainian parliament then set the vote for May 25.

In Crimea, a supposed Russian ultimatum for two Ukrainian warships to surrender or be seized passed without action from either side, as the two ships remained anchored in the Crimean port of Sevastopol, blocked from leaving by Russian ships.

In Brussels, meanwhile, the ambassadors of NATO’s 28 member nations were to hold a second emergency meeting on Ukraine on Tuesday after Poland, which borders both Russia and Ukraine, invoked an article calling for consultations when a nation sees its “territorial integrity, political independence or security threatened.”

President Barack Obama has said Russia is “on the wrong side of history” in Ukraine and its actions violate international law. Obama said the U.S. was considering economic and diplomatic options that will isolate Russia.

In return, Russia’s agricultural oversight agency on Tuesday reversed its earlier decision to lift the ban on imports of U.S. pork. It said the existing U.S. system of checks don’t guarantee its safety.

The European Union’s foreign ministers on Monday threatened Moscow with halting talks on visa liberalization and negotiations on further economic cooperation unless Russian troops on the Crimean peninsula pull back over the next three days.

The bloc’s 28 heads of state and government will hold an emergency meeting Thursday to decide whether to impose sanctions against Russia if there is no de-escalation on the ground.

Russia approves use of military in Ukraine