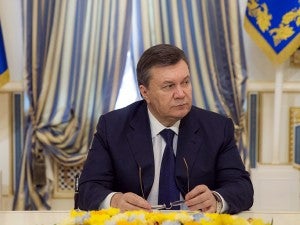 MOSCOW – Ukraine’s deposed president Viktor Yanukovych is still the legitimate head of state of the country even if his authority is “negligible,” Russian Prime Minister Dmitry Medvedev said Monday.

Medvedev added that Russia does not recognize the new authorities who took power in Kiev after the overthrow of Yanukovych, saying they had violated the constitution.

In a posting on his Facebook page, Medvedev did not directly refer to the parliament approval won by President Vladimir Putin at the weekend to send Russian troops onto Ukrainian territory amid the standoff in Crimea.

“Yes, the authority of president Yanukovych is practically negligible but this does not cancel out the fact that according to the constitution of Ukraine he is still the legitimate head of state,” Medvedev said.

Russia has given sanctuary to Yanukovych, who on Friday emerged for the first time to give a news conference in the southern city of Rostov-on-Don.

Medvedev said that Russia is ready to develop “multi-faceted, respectful relations with brotherly Ukraine” – but not with the authorities who replaced Yanukovych.

“Ukraine is not for us the group of people who shed blood… and took power in violation of the constitution and other laws of their state.”

“It is the entire country. A varied group of people. Ukrainians, Russians, Tatars, Jews. Different communities, living in harmony,” he added.

Medvedev’s comments played on the widely-held perception in Russia that the new Ukrainian government is made up of hardcore nationalists who cater to a minority of Ukrainians.

The remarks underlined that while Russia is far from happy with the actions of Yanukovych, Moscow is still far from recognizing the new authorities as a legitimate partner.

The prime minister said that if Yanukovych is guilty of crimes then a procedure of impeachment should have been started against him in Ukraine.

“Everything else is just arbitrary. A seizure of power. And meaning that this new order will be very unstable. It will end in a new takeover. With new blood,” he warned.

“Russia needs a strong and stable Ukraine. A predictable and economically capable partner.

“And not a poor relation, constantly standing with an outstretched hand,” he said.

Medvedev’s comments were posted on his Facebook page: www.facebook.com/#!/Dmitry.Medvedev