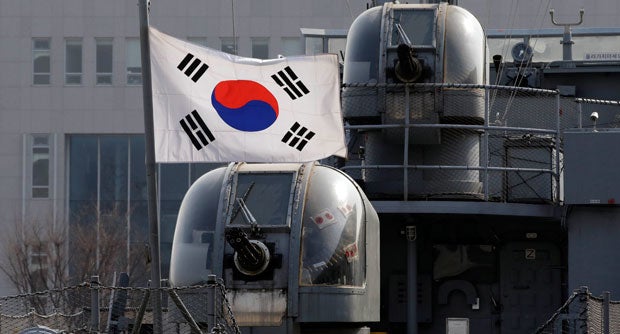 A South Korean national flag flutter at top of a mock of the South Korean Navy’s Chamsuri patrol boat No. 357, which was sunk during the second Yeonpyeong sea battle between the two Koreas in 2002, at the Korea War Memorial Museum in Seoul, South Korea, Monday, March 3, 2014. North Korea fired two additional suspected short-range missiles into the sea Monday amid ongoing military exercises between Seoul and Washington, which the North calls a preparation for an attack, South Korean officials said. AP

SEOUL – North Korea fired short-range missiles into the sea off its eastern coast for the second time in a week Monday, prompting a warning from South Korea of “reckless provocation.”

The missile tests have clearly been timed to coincide with annual South Korea-US military exercises which kicked off a week ago and run until mid-April.

Two missiles were fired Monday and both flew around 500 kilometers into the Sea of Japan, according to South Korea’s Defense Ministry.

Both tests were condemned by Seoul, which urged the North to cease all testing immediately and said it would consider calling for sanctions.

“The North is taking a double-faced stance by making conciliatory gestures on one hand and pushing ahead with reckless provocation on the other,” said Defense Ministry spokesman Kim Min-Seok.

The Scuds are at the longer edge of the short-range spectrum, with an estimated reach of 300-800 kilometres – capable of striking any target in the South.

It is not unusual for North Korea to carry out such tests, which often go unreported by South Korea.

But Kim said the Scud firings were of particular concern.

“We believe that the North is testing various ballistic missiles with various ranges as a show of force to threaten us,” he said.

By contrast, this year’s drills began as relations between Seoul and Pyongyang were enjoying something of a thaw.

They overlapped with the end of the first reunion for more than three years of families divided by the Korean War – an event that raised hopes of greater cross-border cooperation.

Pyongyang had initially insisted that the joint exercises be postponed until after the reunions finished. But Seoul refused and – in a rare concession – the North allowed the family gatherings on its territory to go ahead as scheduled.

Most analysts believe the missile tests reflect Pyongyang’s need to flex its muscles in the wake of the reunion compromise.

Last week also saw an incursion by a North Korean patrol boat across the disputed Yellow Sea border that has been the scene of brief but bloody naval clashes in the past.

No shots were fired and the vessel retreated to its side of the boundary after repeated warnings from the South Korean navy.

North Korea has hundreds of short-range missiles and has developed and tested – with limited success – several intermediate-range models.

Its claims to have a working inter-continental ballistic missile have been treated with scepticism by most experts, but there is no doubt that it is pushing ahead with an active, ambitious missile development program.