Vilma has no plans for 2016, might retire from politics—Sen. Recto 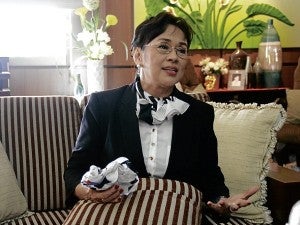 MANILA, Philippines — Batangas Governor Vilma Santos-Recto has no plans to run for higher office in 2016 and might retire from public service, her husband, Senator Ralph Recto told reporters Monday.

“Vilma has no plans to run in 2016, as far as I know,” Recto said when asked by reporters.

“I think she was to make new films … she has also served for a long time in our province of Batangas. There is a possibility she would retire on 2016,” he said.

Before she delved into politics, Santos was a famous actress dubbed as the “Star for all Seasons.”

Previous reports said that Vice President Jejomar Binay was looking at the possibility of having Santos as his running mate when he guns for the presidency in 2016.

Recto however said that there were no talks of those plans yet.

“If ever Vilma will run, it will be for president and not for vice president… president of senior citizens, and she will be the most beautiful,” Recto joked.

For his part, Recto said that he is looking forward to the possibility of running again for the Senate in 2016.