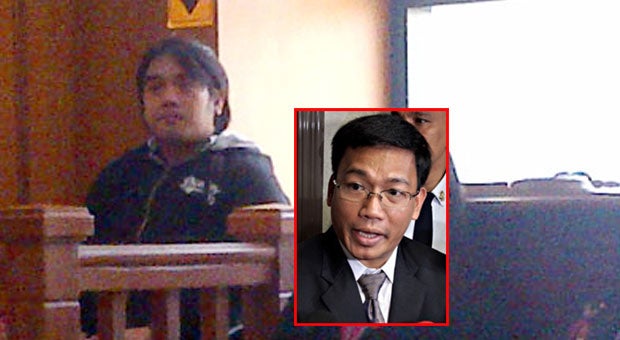 Benhur Luy, the principal whistle-blower in the alleged P10-billion pork barrel scam, has dropped his chief counsel, Levito Baligod (inset), saying the lawyer had been very busy with other advocacies. FILE PHOTOS

MANILA, Philippines—Benhur Luy, the principal whistle-blower in the alleged P10-billion pork barrel scam, has dropped his chief counsel, Levito Baligod, saying the lawyer had been very busy with other advocacies.

“It has been a rough and rugged road for us, and for all you have done, I am eternally thankful,” Luy said in his March 3 letter to Baligod, which was released to the media by Justice Secretary Leila de Lima on Tuesday.

De Lima said Luy had engaged the services of three to four lawyers. She added that the Department of Justice and National Bureau of Investigation had nothing to do with Luy’s choice of new lawyers.

As early as two weeks ago, Luy met with his new lawyers from Mendoza, Antero and Bautista Law Office, the Inquirer has learned.

Four lawyers from the firm accompanied Luy to the NBI on Monday and assisted him in a meeting with other whistle-blowers. 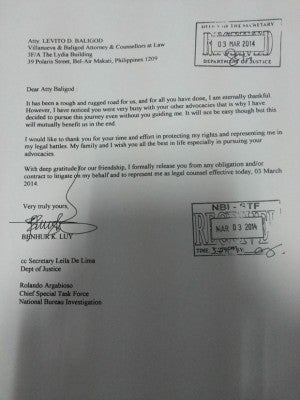 The Inquirer talked to one of the firm’s associates, Patrick Maglinao, on Tuesday and asked him to comment on the statement of Luy’s former counsel that someone was behind his actions. Maglinao declined to answer questions and said he was not authorized to talk to reporters.

“Someone wants to control Benhur and I will be a hindrance to that,” Baligod told the Inquirer. He declined to elaborate. He said he would provide details on this soon.

“I was never negligent of my professional obligations to him,” said the lawyer. “I have solved his legal problems. He no longer needs my services because everything is now in place.”

As for the “advocacies,” he said he had two new witnesses to present in the pork barrel scam.

“I cannot at all times be with him because I also have to attend to some cases, and in those times that I could not be around I asked two colleagues to assist him,” Baligod said.

De Lima said the parting of ways between Luy and Baligod would not affect the case against Janet Lim-Napoles, the alleged mastermind in the diversion of congressional Priority Development Assistance Fund (PDAF) allocations to ghost projects and kickbacks.

In his letter, Luy said he had decided to “pursue this journey without you guiding me” after he noticed that the lawyer had been busy promoting his other causes.

He wished the lawyer the “best in life, especially in pursuing your advocacies.” He did not say what these were.

“It will not be easy though but this will mutually benefit us in the end,” Luy said.

In a news briefing, De Lima said she learned about Luy’s complaint several weeks ago. “I thought whatever differences between them would be patched up or resolved,” she said.

De Lima said she had not talked to Luy. She said Baligod remained the lawyer of another whistle-blower, Merlina Suñas.

She said Baligod also told her he had two new witnesses in the pork barrel scam. De Lima said she did not know whether they were offering to become state witnesses as well.

Luy’s family hired Baligod in March last year to secure the release of Luy, who was detained by Napoles allegedly to prevent him from revealing to authorities her alleged illicit activities. Napoles was charged with serious illegal detention and jailed.

Eventually, Luy implicated Napoles, his cousin and boss in JLN Group of Companies, for allegedly masterminding the scam.

The NBI has filed plunder and malversation cases against close to 100 persons, including Senators Juan Ponce Enrile, Jinggoy Estrada and Ramon Revilla Jr., in the Office of the Ombudsman in connection with the alleged PDAF racket.

They have denied wrongdoing.

Napoles’ lawyers on Tuesday asked the Makati Regional Trial Court to allow her to go under the knife for her cyst in the uterus at St. Luke’s Medical Center in Bonifacio Global City and be confined there afterward, saying it has  “the most advanced medical equipment in the country.”

In an 11-page motion filed on Monday afternoon, Napoles’ lawyers said that while her condition was not declared as life-threatening by the doctors of the Philippine National Police last week, there was a need for her to undergo surgery for the removal of the lump in her abdomen, particularly in the uterus.

“Failing in such could lead to a more serious health problem, which is earlier stated as hemorrhage or loss of blood resulting (in) anemia, which, in turn, is fatal,” the lawyers said.

The court ruled after a half-day hearing that Napoles should be allowed to be examined at the PNP hospital.—With Tetch Torres, INQUIRER.net

Baligod: I was eased out by forces out to control Luy

Read Next
Putin: Russia has right to use force in Ukraine
EDITORS' PICK
Holidays made best with Acer’s ‘Holidays at Home’ raffle promo
BIR audits tax compliance of Pharmally
Two more sites at Robinsons Malls for temporary offsite passport services
Pharmally’s Twinkle Dargani in tears when asked about missing documents
Corruption in PH: Where presidential aspirants stand
Smart offers wireless fiber-like speeds to Filipino homes with country’s first 5G Prepaid Home WiFi
MOST READ
Roque ‘hurt’ after presidential aspirant did not adopt him in Senate lineup
Pharmally’s Twinkle Dargani in tears when asked about missing documents
Gordon to Duterte: ‘How dare you ask for Filipinos’ vote when you failed them?’
3 travelers from S. Africa, Burkina Faso, Egypt test positive for COVID-19
Don't miss out on the latest news and information.