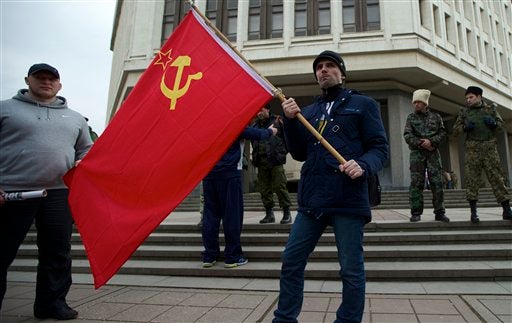 Local residents hold Sovivet flag as members of Cossack militia guard the local parliament building in Simferopol, Ukraine, on Thursday, March 6, 2014. Lawmakers in Crimea declared their intention Thursday to split from Ukraine and join Russia instead, and scheduled a referendum in 10 days for voters to decide the fate of the disputed peninsula. AP PHOTO/IVAN SEKRETAREV

SIMFEROPOL, Ukraine—Crimea’s pro-Russian parliament voted Thursday to have the tense Ukrainian region secede and join Russia, triggering fury in Kiev while the EU warned of harsh sanctions on Moscow if it kept refusing the path of dialogue.

A decision by Crimea’s local legislative assembly to call a March 16 “referendum” in the tense pensinsula on joining the Russian Federation was dismissed as illegitimate by Ukraine’s interim government, the European Union and the United States.

However, with Russian forces in effective control of Crimea—which is home to an ethnic Russian majority—the secession move ratcheted up the stakes in a crisis that is already Europe’s worst security emergency in the post-Cold War era.

The pro-West, interim administration in Kiev—brought to power on the back of three months of protests that claimed nearly 100 lives—immediately took steps to disband Crimea’s parliament. Interim president Oleksandr Turchynov said the Crimea legislators’ decision was a “crime” inspired by the Kremlin.

US President Barack Obama warned the proposed referendum in Crimea would violate Ukranian sovereignty and international law. He said the US and its allies were united against Russia’s incursion into Ukraine, but said a diplomatic solution to the standoff remained possible.

US Secretary of State John Kerry, after holding talks in Rome with his Russian counterpart, Sergei Lavrov, laid the blame for the escalation of the crisis on Russia.

The United States slapped visa bans on Russians and Ukrainians it held responsible for destabilizing both Ukraine and security across Europe as a whole.

EU leaders holding a summit in Brussels took political measures—but not economic sanctions—against Russia over its use of force in its western neighbour following the February 22 ouster of Kiev’s pro-Moscow leadership.

Ukraine’s interim Prime Minister Arseniy Yatsenyuk made an impassioned appeal in Brussels for EU states and the United States to rise to his nation’s defense in the face of what he called an unfolding Russian aggression.

“We still believe we can solve in peaceful manner but in case of further escalation and military intervention into Ukraine territory by foreign forces, Ukranian government and military will act in accordance with the constitution and laws. We are ready to protect our country,” he said.

Yatsenyuk conceded that Ukraine’s forces were dwarfed by the Russian army but stressed that his country’s troops had the “spirit” to defend themselves in the face of a Russian threat.

Russian President Vladimir Putin for his part on Thursday chaired an unscheduled meeting of his national Security Council to discuss the latest developments but issued no further comment.

The United States ramped up the pressure on the Kremlin by slapping visa bans on Russians and Ukrainians it blames for destabilizing peace and stability both in Ukraine and Europe as a whole.

It was the latest in a series of moves by the US administration to punish Moscow for what the White House denounced as “Russia’s ongoing violation of Ukraine’s sovereignty and territorial integrity.”

European leaders—split between hawkish Eastern European states and big Western European powers that want to limit the damage to their economic relations with Russia because of their reliance on its natural gas—reiterated a commitment to sign an association accord with Ukraine before it holds snap presidential polls on May 25.

EU president Herman Van Rompuy said the 28-nation bloc “decided that as a matter of priority we will sign (the agreement) very shortly.”

“This means before the Ukrainian elections of 25 May.”

Ousted Ukrainian president Viktor Yanukovych’s decision to ditch the pact in November in favor of closer ties with Russia sparked the initial wave of protests in Kiev that led to his regime’s downfall and rise of new pro-EU rulers.

The European bloc agreed after about six hours of tense discussions to suspend visa and economic talks with Russia—a blow for Moscow’s years-long efforts to win open travel rights for Russians.

EU leaders also adopted a statement demanding that Russia enter into negotiations in the next few days. The talks need to “produce results within a limited timeframe,” said the statement.

“In the absence of such results the European Union will decide on additional measures, such as travel bans, asset freezes and the cancellation of the EU-Russia summit” in June.

Rompuy dubbed the Ukraine crisis as “perhaps the most serious challenge to security on our continent since the Balkans wars” in the 1990s.

The epicenter of the crisis has been Crimea—a rugged region seized by Russia in the 18th century and annexed to Ukraine in Soviet times as a “gift” in 1954.

It has been the home of Russian navies since the 18th century and has in the past two decades enjoyed more autonomy from Kiev than any other part of Ukraine.

Russian forces have surrounded Ukrainian military bases in Crimea since last weekend and on Thursday even scuttled an old warship at the entrance of a lagoon, trapping Ukrainian navy vessels.

But they also seemed ill-prepared to hold off an all-out Russian assault if it came.

“It’s extremely tense and I consider it a miracle that bloodshed has been avoided so far,” the Organisation for Security and Co-operation in Europe’s Crimean envoy Tim Guldimann said in Kiev after returning from the peninsula.

Guldimann said he cut short his visit after UN special envoy to Crimea Robert Serry was forced to leave on Wednesday upon being confronted by gunmen who said they had orders to take him to the airport.

Serry took the first flight out of the region—to Istanbul—but returned to Kiev on Thursday.

Violent protests have also broken out in cities in mainly Russian-speaking eastern Ukraine such as Donetsk, the regional stronghold of the ousted Yanukovych.

The Donetsk regional administration building has been raided repeatedly since Wednesday by pro-Moscow and pro-Kiev crowds. It flew the Ukrainian flag on Thursday evening after the Russian tri-color put up only hours earlier had been taken down.

Putin has condemned the changeover of power in Kiev as “an unconstitutional coup” but said a full-scale military intervention in Ukraine would be a “last resort.”—Lilia Budhurova with Claire Rosemberg in Brussels and Dmitry Zaks in Kiev