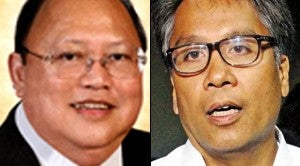 “In order to have a serious chance at winning the presidency, one has to have funds, an organization or a party, and name recall. At this point, only Binay and Roxas have these, the rest are just pretenders,” Zamora said in an interview.

Zamora, San Juan’s representative in the House of Representatives, is perceived to be a backer of Sen. Alan Peter Cayetano of the Nacionalista Party, who has announced his desire to run for president in the 2016 elections. But Zamora said Cayetano merely had an office in a building owned by the Zamoras at the Fort Bonifacio Global City in Taguig.

Binay has already announced his plan to pursue his presidential ambition with either Sen. Jinggoy Estrada or Batangas Gov. Vilma Santos as his vice presidential running mate.

The ruling Liberal Party has continued to look to Roxas as its presidential bet in 2016 despite his narrow loss to Binay in 2010.

Some LP insiders claim that President Benigno Aquino III has been coaxing his friend, Sen. Francis Escudero, to be Roxas’ running mate. Other LP members believe that the President could follow in his mother’s footsteps and choose another bet outside of LP.  The late President Corazon Aquino picked Fidel V. Ramos over the administration party’s choice then, former House Speaker Ramon Mitra, in the 1992 presidential elections.

LP leaders reckoned that an endorsement by the President, whose popularity has remained relatively high since his landslide victory four years ago, could provide the winning edge to any aspirant who was popular but lacked the necessary resources such as Presidential Assistant for Rehabilitation and Recovery Panfilo Lacson and Sen. Grace Poe.

Binay-Estrada tandem shaping up for 2016

Senator Estrada most likely to be Binay’s VP bet in 2016, says Nancy

Read Next
Kalanggaman flies again
EDITORS' PICK
Tips for a cheerful life
Connect to PH’s fastest network with new Signature Plan Lite at only P599 per month
Duterte: When I said I will fight drugs in 6 months, I thought it was like in Davao
Harnessing technology for quality education
Hidilyn Diaz wins weightlifting gold in Tokyo Olympics
Duterte warns of possible lockdown if ‘more aggressive’ Delta variant spreads
MOST READ
Hidilyn Diaz wins weightlifting gold in Tokyo Olympics
Hidilyn shoots not only for gold but also for permanent place in PH sports history
Go to war with China over West PH Sea? It will be a ‘massacre’, says Duterte
Duterte acclaims Sotto: ‘He can become a good vice president’
Don't miss out on the latest news and information.