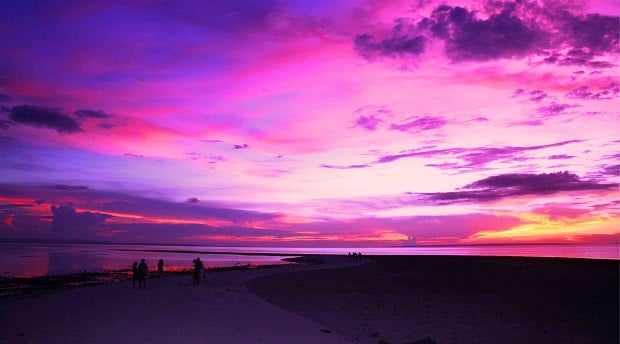 LEYTE—Its two famous shifting sand bars were leveled by Supertyphoon “Yolanda” in November last year. Some coconut trees that lent beauty to the landscape either lost their crowns or were toppled.

In January, 306 European tourists frolicked on Kalanggaman’s powdery white-sand beach and azure waters when the newly built international cruise ship MS Europa 2 anchored. It was the “abre grande (grand opening)” of the tourism industry of  Palompon, which Yolanda halted after Nov. 8, 2013, when it battered the tourist destinations of the second-class municipality (annual income: P45 million-P55 million).

Kalanggaman is the crown jewel of the municipal government’s tourism program. Aside from its white-sand beach and blue waters, it is a good diving site, especially with its colorful reefs.

According to Cleofe Rivera, eco-tourism officer of Palompon, the island is called Kalanggaman because of its bird-like shape. “Langgam” is a Visayan word for “bird.”

During the storm, sand bars that protruded in the eastern and southern ends of the island were flattened by raging waves.

“The devastation was of staggering magnitude. We thought Kalanggaman will never be the same again,” said Raoul Bacalla, municipal environment and natural resources officer and officer in charge of  Northwest Leyte Tourism Alliance.

The restoration of the eco-tourism-infrastructure project, dubbed the Bangon Palompon Project, would cost over P26 million, he said.

“Now, [more than] 100 days after the storm, Kalanggaman is even more beautiful. The sand is powdery and whiter,” Bacalla said. “Nature has its way of making its landscape more beautiful than ever.”

The island is a 45-minute ride from the town proper, which is a three-hour drive from Tacloban City, the regional center of Eastern Visayas. By boat, it is two hours away from Malapascua Island in northern Cebu province, the jump-off of most of the Malapascua divers.

Entrance fee to Kalanggaman is P150 for a day tour and P250 for an overnight stay. A boat trip for at most 20 passengers costs P3,500.

Bacalla said a big chunk of the income was derived from entrance fees and use of facilities on the island.

Last year, two international luxury ships—the MS Europa and the MS Bremen, both of Hapag-Lloyd Lines of Germany—made a stopover on Kalanggaman, bringing to shore close to 750 foreign tourists.

The visits ignited people’s curiosity on how a small island had become a favorite cruise destination. As a result, tourist arrivals tripled last year from its 2012 figure.

Marking the island’s resurgence as a tourist spot was the visit on Jan. 10 of foreign tourists, mostly from Germany, and crew members of the Europa 2. They paid a total of P158,000 to enjoy a 12-hour exclusive stay there.

Rubber boats ferried them to shore as Palompon tourism policemen secured the area.

“We had a fiesta-like welcome for the guests, and our municipal staff dressed in baro’t saya and camisa de chino performed a shorter version of our Lawig Festival, a dance celebrating the town’s bounty and history and how their patron saint, St. Francis Xavier, interceded on their behalf,” Bacalla said.

“It will encourage and give confidence to local and foreign tourists to visit Kalanggaman Island again and our other tourist destinations, not only in Palompon, but also in the whole of Eastern Visayas. We have bounced back after Yolanda,” he said in a statement.

Solid waste management is strictly observed on the island.

Before they leave, tourists are briefed and supplied with black bags for the proper segregation of garbage, which they are to bring back to the mainland.

Before the grand opening, the United Nations Development Program  hired 200 residents of Palompon for a two-week cash-for-work program to clean up tourism destinations, including Kalanggaman.

Tourism Secretary Ramon Jimenez, who recently visited Palompon, pointed out that the tourism stakeholders should look into how to enhance cruise tourism not only in Palompon but also in the entire region.

The cruise tourism should be expanded, alongside Kalanggaman, because Palompon and the nearby towns have a lot to offer, he said.

“It’s the people and the local government that should decide what they want their places to be known for and how they want to promote it. We are just here to support,” Jimenez said.