Binay-Estrada tandem shaping up for 2016 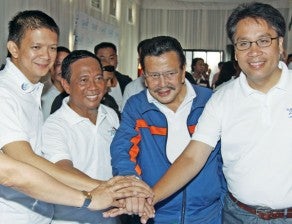 Have Senators Francis “Chiz” Escudero and Jose “Jinggoy” Estrada gone their separate ways to run for the vice presidency in 2016?

The buzz in Manila’s political circles is that the longtime friends have been jockeying for Vice President Jejomar Binay’s choice of No. 2 in 2016, and that Estrada has edged out Escudero.

And probably out of the senatorial ticket of the United Nationalist Alliance (UNA) for next year’s midterm elections as well.

The two parties teamed up to dominate the congressional and local races next year, but it is widely believed that Binay will use UNA as a springboard for the 2016 presidential contest and that the deal between him and Estrada was the choice of the younger Estrada as his running mate.

But Escudero, the buzz goes, wants that spot as a reward for supporting Binay in the 2010 elections. His endorsement of a “Noy-Bi” vote as the 2010 campaign hit the homestretch cost then Senator Manuel “Mar” Roxas the vice presidential election and gave then Senator Benigno Aquino III, the eventual presidential winner, a vice president from a rival party.

Relations between Mr. Aquino and Binay have been good so far, but relations between the President and Escudero may be severely tested when the senator comes knocking for shelter in the Liberal Party.

Escudero can no longer return to the Nationalist People’s Coalition (NPC) of businessman Eduardo “Danding” Cojuangco that he deserted in 2010 because it could not bankroll his run for Malacañang.

Meanwhile, former President Estrada said on Tuesday that Escudero may not be on the UNA senatorial ticket for next year.

Estrada said in a phone interview with the Philippine Daily Inquirer that it was his impression that Escudero was joining the senatorial slate being formed by the Liberal Party.

“Now he is ambivalent,” Estrada said in Filipino, referring to Escudero. “I don’t know why. What I think is that he may have asked for many favors from President Aquino.”

If it is true that the President is fixing things between Escudero and Roxas, then UNA is not looking to get Escudero even as guest senatorial candidate next year.

“We will not accept guest candidates,” Estrada said. “That’s what we have agreed on.”

Estrada denied that his son is being groomed to become Binay’s vice presidential running mate in 2016.

Estrada said it was embarrassing for him to talk about his son running with Binay. He acknowledged, however, that “anything can happen” before 2016.

Escudero won’t join UNA to run for reelection next year if Binay is not picking him as his No. 2 in 2016, which seems certain, so the buzz goes, because handing that spot to Senator Estrada is a done deal.

Escudero leads senatorial candidates in national surveys and as such he will be a prized catch for any party. With the NPC and the UNA out and with the Nacionalista Party of Senator Manuel Villar talking of a coalition with Mr. Aquino’s Liberal Party, he has nowhere to go but to the President for adoption.

But Roxas, whom Escudero junked in 2010 in favor of Binay, is the president of the Liberals. Would Mr. Aquino plead with his best friend Roxas to let bygones be bygones and let Escudero come aboard?

A source close to Escudero on Tuesday said that did not pose a problem at all. Escudero, the source said, is considering a number of options for 2016.

If he can’t run for vice president, then he will run for president. Then again, he might stay out of the fray and be a “kingmaker,” as he did in 2010 when he gave the vice presidency to Binay by endorsing “Noy-Bi.”

But the source said that President Aquino had been hinting to friends a Roxas-Escudero team for 2016, which will be a “powerhouse” combination if Escudero has no problem running as Roxas’ No. 2.

If he has, the source said, the NPC is not really lost to him. He may have abandoned the party, but not the party boss, Cojuangco, who considers him a “prodigal son,” the source said.

Escudero and Senator Estrada denied they have a rift. Escudero said he had a talk with Binay before the Vice President left on an overseas trip. On the other hand, Estrada said UNA was focused only on next year’s midterms. Any talk of a vice presidential running mate for Binay in 2016 is premature, he said.

Binay, who had just returned from his trip, declined to comment.

“It’s too early to even speculate about VP Binay’s running mate in 2016,” said Joey Salgado, Binay’s press officer. “But I guess it’s never too early for political intrigues.”

Estrada said he invited Escudero to be his running mate in 2010, but Escudero took too long to respond. When Escudero responded, he had already picked Binay as his No. 2, he said. Escudero responded only after he had failed to get Cojuangco’s support for his presidential candidacy.

Estrada said he had been told that Escudero’s thinking then was “president or nothing.” But at the last minute, Escudero came to say “he was already open,” Estrada said. “I told him it was already closed.”

So is UNA, if it’s all up to Estrada.

In the Liberals’ camp, meanwhile, it appears that the talks for a coalition with the Nacionalistas for next year’s congressional and local races are making progress.

Budget Secretary Florencio Abad, a Liberal stalwart, said President Aquino and Villar had moved forward from their bitter rivalry in 2010 and were now ready to form a congressional coalition.

“We all understand that those things come up and after the election everything is finished, then you move forward and, you know, you deal with what you have to deal with,” Abad said, referring to the mudslinging between Villar and Mr. Aquino during the 2010 campaign.

“In the case of the President, running the country; in the case of Senator Villar, once again, consolidating his party and looking forward to the next exercise,” Abad said.

He said Mr. Aquino and Villar had discussed a partnership. The President, he said, made it clear to Villar that if they would have a partnership, he wanted it to be an enduring one based on shared values.

“So it seems that was the starting point of this partnership,” Abad said.

If Mr. Aquino and Villar had differences, Abad said, “those are in the past and  we need to look at this partnership moving forward.” With reports from Christian Esguerra and Norman Bordadora