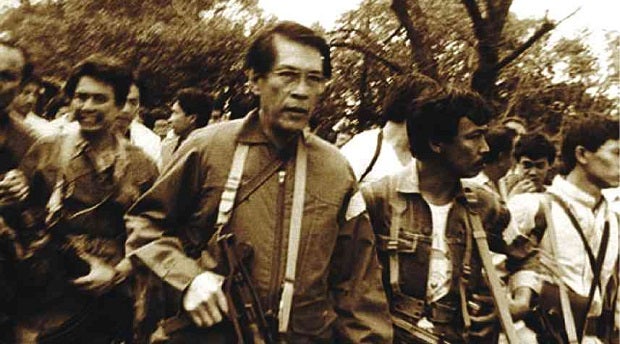 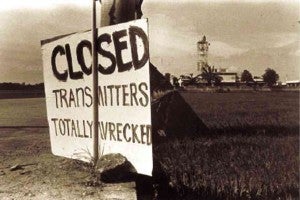 DISABLED Above, the transmitters of the Catholic-run Radio Veritas, which had been airing live reports from Edsa, are totally wrecked after being bombed by the forces loyal to Gen. Fabian Ver. FILE PHOTO 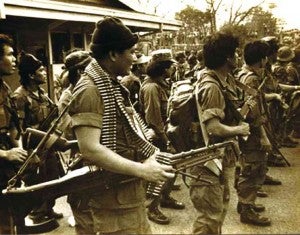 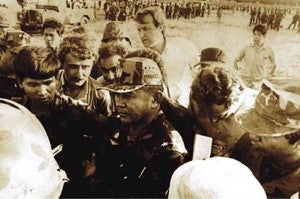 AFP Chief Gen. Fabian Ver gathers his men in Fort Bonifacio and appoints Ramas, his protégé, to lead the assault on Camps Aguinaldo and Crame.

Enrile urges Cory Aquino to announce her government, with her as duly elected president. Sin goes on the air to ask Marcos and Ver not to use force.

In Washington, US Secretary of State George Shultz assembles a small group, including former Ambassador to the Philippines Michael Armacost, to lay down a firm policy on the Philippines. 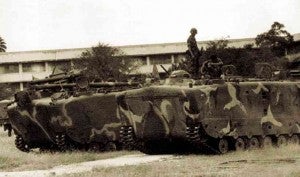 JAMMED Tanks stand by on Ortigas Avenue in Quezon City as the road to Camps Crame and Aguinaldo are blocked by huge crowds on Edsa. ROGER CARPIO

Marine commander Gen. Artemio Tadiar is stunned to learn that Ramas, who has little combat experience, has been assigned to lead the attack on rebels. Tadiar and his men are standing guard in Malacañang.

Cory Aquino, still in Cebu City, turns down Assemblyman Ramon Mitra’s offer to bring her to Palawan province, and decides to return to Manila. 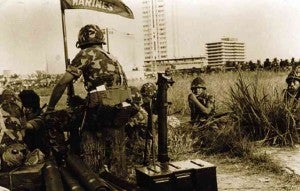 Mass is celebrated inside Camp Crame. Outside, at Edsa, people continue to arrive, some on foot. Human barricades are further fortified.

Marcos orders Col. Antonio Sotelo, commander of the Air Force’s 15th Strike Wing based in Sangley Point, to disable the helicopters in Camp Crame. With no one volunteering to carry out the attack, Sotelo discusses with his men a plan to fight alongside the Enrile-Ramos troops. 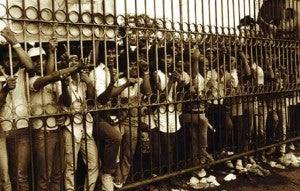 REAL HEROES The people forming human barricades flash the “Laban” sign as they stand at the gate of Camp Crame. FILE PHOTO

Cory Aquino holds a brief press conference in Cebu, asking the people to support the military rebels and calling on Marcos to step down.

Marcos joins his men at the table and then appears again on television and presents two more arrested military officers, Lt. Col. Jake Malajacan and Maj. Ricardo Brillantes who both read statements. Marcos says other officers have been arrested and are being interrogated. He scoffs at Enrile and Ramos’ demand that he resign. He brushes aside claims that 300,000 to 400,000 people are gathered at Edsa, some carrying images of the Virgin Mary.

Cory Aquino arrives in Manila and proceeds to her sister’s house in Wack-Wack, Mandaluyong City.

Enrile and Ramos decide to consolidate their forces at Camp Crame. Linking arms, the people at Edsa create a protective wall for Enrile and RAM troops as they leave Camp Aguinaldo and cross the highway to get to Crame on the other side.

People at Ortigas and Edsa form human barricades to block the path of the oncoming tanks. A tense standoff begins.

Marcos calls Enrile and offers him absolute pardon. He rejects Enrile’s demand that the tanks be stopped.

Radio Veritas signs off after the emergency transmitter bogs down.

In a news conference, Enrile announces his men’s rejection of Marcos’ offer of pardon. Ramos talks about “New Armed Forces.”

Papal Nuncio Bruno Torpigliani hands Marcos a letter from Pope John Paul II asking for a peaceful resolution of the crisis. The White House issues a statement questioning “credibility and legitimacy” of the Marcos government.

June Keithley, who has been broadcasting at Radio Veritas since the start of the rebellion against Marcos, moves to dzRJ using Radio Veritas’ frequency of 840 kHz to keep her location secret. Col. Ruben Ciron, one of Enrile’s men, facilitates the transfer of the frequency.

The crowd thins as the tanks retreat, but the human barricades remain intact.

Behind the ‘miracle’ of Edsa