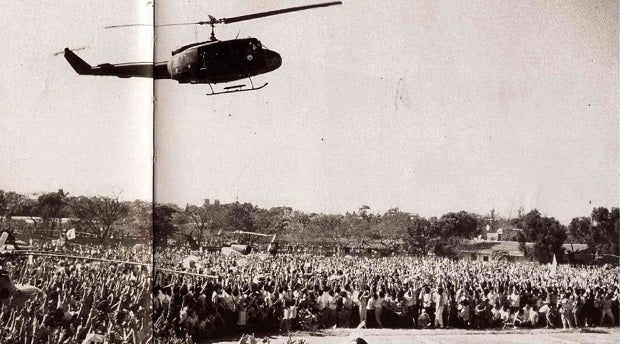 MAJOR VICTORY People cheer as one of the attack helicopters, led by then Col. Antonio Sotelo, lands in Camp Crame. The helicopter squadron defected to the rebel soldiers’ side on the second day of the revolt. PHOTO FROM THE BOOK “PEOPLE POWER: THE PHILIPPINE REVOLUTION: AN EYEWITNESS HISTORY”

Twenty-eight years after he led the defection of the Air Force’s 15th Strike Wing in a move that favored anti-Marcos forces during the historic Edsa People Power Revolution, retired Lt. Gen. Antonio Sotelo lamented that nothing much had changed in the military.

“What we have is a military controlled by a clique, a mistah system,” said Sotelo, who served as Air Force chief in 1989.

“There is no dissenting vote. There is no check and balance,” he added.

Now 81 years old, the retired officer spends his time writing commentaries for newspapers and online publications, and taking care of his ailing wife, Lilian. “I’m a full-time caregiver,” he said on the weekend that the Inquirer visited him in their two-story house in leafy Alabang Hills, Muntinlupa City.

One of Sotelo’s married sons and his family occupy the second floor, providing the elderly couple the pleasure of having an apo (grandchild) in the house. 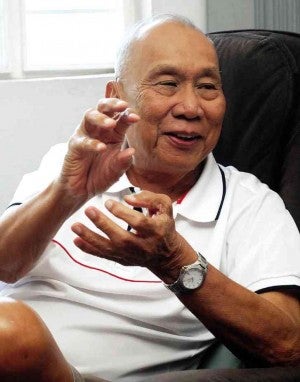 NO REGRETS, BUT… Retired Lt. Gen. Tony Sotelo speaks to the Inquirer in his home in Alabang Hills. ARNOLD ALMACEN

It’s a restful, quiet life in marked contrast to the excited cheers and hubbub that greeted him when he landed at Camp Crame that February morning in 1986.

Sotelo was a colonel then. Earlier that day, he received orders from then President Ferdinand Marcos to disable the helicopters under the command of military rebels led by then Defense Minister Juan Ponce Enrile and then Constabulary Chief Lt. Gen. Fidel V. Ramos.

But instead of carrying out Marcos’ orders, Sotelo defected.

Did he know that his defection would change the power equation? “I had an inkling, but I was not sure,” he said.

But he was indubitably convinced about how Armed Forces of the Philippines Chief of Staff Gen. Fabian Ver would react.

“You think you’d live through something like that with General Ver? No way, no way,” Sotelo said.

His move underscored the need to have a military loyal to the republic, not to a person or an officer or the Philippine Military Academy (PMA).

But what we have is “a military that is controlled by a clique, a mistah system,” Sotelo said. “We have officers who want to preserve the elitism of the PMA.”

The AFP chief of staff, the commanding generals of the Army, Navy and Air Force, and even the chief of the Philippine National Police are all graduates of the PMA, he said.

Even the Marine Corps, which can serve as a countercoup force, is also led by a PMA graduate, he added.

“There is no dissenting vote. There is no check and balance,” Sotelo said. “This is dangerous.”

The unspoken rivalry between PMA graduates and non-PMA graduates has festered in military organizations since the martial law years. Some blame it on Marcos, who cultivated the loyalty of a group of PMA graduates to ensure his grip on power.

Within Marcos’ select group existed yet another elite: the select few who were Ilocanos, with a sprinkling of non-Ilocanos who happened to be related to former first lady Imelda Marcos by blood or by marriage.

The non-PMA graduates within Marcos’ inner circle were the choices of Ver, a product of the Reserve Officers’ Training Corps of the University of the Philippines Diliman. Ver served as chief of Marcos’ Presidential Security Command and eventually became AFP chief of staff.

Ver also maintained his own circle of officers who were rewarded with juicy assignments for their unequivocal loyalty. “Favoritism” was in fact one of the issues raised against Marcos and Ver during their term in Malacañang.

Sotelo, a non-PMA graduate, was one of a handful who made it to the top in the Air Force. He was already chief of the 15th Strike Wing when he made his game-changing defection to Cory Aquino’s camp on Feb. 23, 1986.

But Sotelo said he doubted if a non-PMA graduate would ever make it as Air Force chief again.

“It cannot happen [again],” he said. “Those PMA graduates control the structure and the national security apparatus in such a way that no one will ever get [a post] above that of a PMA alumni.”

Which was why, for at least two decades now, Sotelo has been pushing for the creation of an air academy where future pilots and the crew of the local aviation industry can be trained.

He said a similar naval academy and even a coast guard academy could also be set up to train officers for each respective service. These academies would be maintained and managed like the PMA.

The proposal made it to the last Congress, Sotelo said, adding that the education committee headed by then Sen. Edgardo Angara even held a public hearing on the proposal.

But top defense and AFP officials in active service who were invited to the hearing shot down the proposals, Sotelo said. “To a man, they all opposed the bill,” he added.

Still, the former Air Force chief acknowledged that the military was not entirely to blame for the elitism in the country’s defense organizations.  “This is the result of a bad policy that we do not want to change,” Sotelo said.