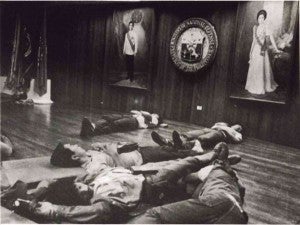 SLEEP-IN Reporters covering the Edsa event catch up on their sleep inside Enrile’s office at Camp Aguinaldo. PHOTO FROM THE BOOK “CHRONOLOGY OF A REVOLUTION”

(Editor’s Note: The following chronology was distilled from books and Inquirer archives about events leading up to what is called the “real” Edsa. This article is reprinted from the Philippine Daily Inquirer of Feb. 22, 2006, Page A1.)

Defense Secretary Juan Ponce Enrile and key aides finalize Enrile’s speech in which he will proclaim himself head of a ruling junta after rebel troops led by the Reform the Armed Forces Movement (RAM) assault on Malacañang. Assault is planned for Feb. 23 at 2 a.m.

Armed Forces of the Philippines Chief of Staff Gen. Fabian Ver fortifies Palace, having been informed of an impending coup by Maj. Edgardo Doromal of the Presidential Security Command.

Doromal was tapped by RAM to serve as a spy in the Palace but he later confessed to his commander, Col. Irwin Ver, son of the AFP chief, and agreed to become a double agent.

At a meeting in Enrile’s Dasmariñas house in Makati City, RAM chief Col. Gregorio Honasan learns that a Marine battalion is positioned exactly at the rebels’ planned point of attack.

Honasan learns that more soldiers are being deployed to guard the Palace. Trade Minister Roberto Ongpin calls Enrile to say that his 19 security men have been arrested. Enrile worries because three were on loan from him and knew of the coup plot. 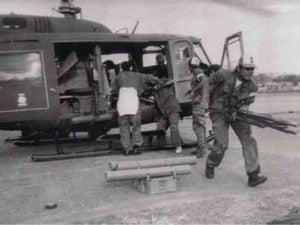 GEARING FOR BATTLE Rebel soldiers unload guns and munitions from a chopper in Camp Aguinaldo as they prepare for a long siege against loyalist troops. FILE PHOTO

In Malacañang, President Ferdinand Marcos meets with US Ambassador to the Philippines Stephen Bosworth and Philip Habib, US President Ronald Reagan’s “troubleshooter.” The two Americans note the worsening political crisis and push for Ver’s removal from office.

Honasan and Lt. Col. Eduardo Kapunan arrive at Enrile’s house; they tell him of orders to round up all members of their movement. Between hiding in Cagayan Valley and regrouping for a possible stand-off, Enrile chooses the latter and tells everyone to go to Camp Aguinaldo.

Capt. Ricardo Morales, one of Imelda’s security officers, surveys the Palace defenses and attempts to withdraw firearms from the Presidential Security Unit armory. He is accosted and becomes the first of four alleged assassins of the first family arrested by Marcos forces. The others are Maj. Saulito Aromin, Lt. Col. Jake Malajacan and

Before boarding his plane out of Manila, Habib tells a US Embassy officer to tell Bosworth that Corazon Aquino won the presidential “snap” election. Marcos himself called to show that he still had the support of his countrymen. “Marcos is finished and we ought to offer him asylum in the United States.”

Enrile and RAM discuss how to cover up their coup plot in order to drum up support for themselves. Enrile calls AFP Vice Chief Gen. Fidel Ramos, who declares his full support.

Honasan gives the signal to prepare his men for combat. He, Enrile and Kapunan fly to Aguinaldo in a chopper.

At Aguinaldo, Enrile’s guards bring out brand-new M-16s, Uzis and Galils. Enrile orders troop deployment around Camp Crame. On the phone, he tells his wife Cristina to call Inquirer founding chair Eugenia Apostol to apprise her of what’s happening and request her to inform Jaime Cardinal Sin. 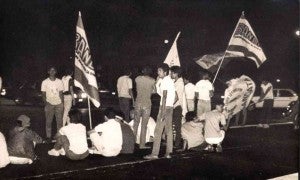 FIRST NIGHT Members of civil society and opposition groups set up camp along Edsa to start their vigil outside Camp Crame where anti-Marcos troops had holed up. FILE PHOTO

Unaware of unfolding events, Ver and Imelda attend the wedding of a general’s son at Villamor Air Base. Ver is stunned when told. Marcos calls his three children to Malacañang. Enrile tells Sin: “I will be dead within one hour. I don’t want to die … If it is possible, do something. I’d still like to live.”

Ramos arrives at Aguinaldo after a dialogue in his Alabang house with a group called the Cory Crusaders.

Ramos and Enrile hold a press conference to announce the withdrawal of support from Marcos. They say they are not out to seize power but to return it to the people in the person of Aquino, whom they recognize as the rightfully elected President.

They have less than 500 men and no air, armor or artillery equipment.

Enrile ends a phone conversation with Ver, with both adversaries agreeing not to attack tonight. It was a revolution that started with a ceasefire.

Radio Veritas continues with the blow-by-blow account of the rebellion. Enrile and Aquino, who is secured in the Carmelite convent in Cebu City, have a brief phone conversation. (Aquino had known of Enrile’s coup plans. But she returned to Cebu with her vice presidential running mate Doy Laurel to thank the Cebuanos for the 70,000 margin of victory given her “despite the goons of Marcos allies.” Aquino also came to sell her seven-point program of nonviolent protest, which is just a week old, to the second most populous city in the country.)

In Malacañang, Imelda tells reporters of a plot to kill her and Marcos at 12:30 a.m.

August Twenty-One Movement’s Agapito “Butz” Aquino, the younger brother of Ninoy Aquino, despite his group’s decision to wait, throws his support behind rebels and calls on volunteers to meet him at Isetann department store in Cubao preparatory to marching to Edsa to support the so-called breakaway Marcos military.

(Shortly after) over Radio Veritas, Jaime Cardinal Sin forcefully calls for the public support of Enrile and Ramos.

Marcos announces over government-owned Channel 4 that he is in total control of the situation and calls on Enrile and Ramos “to stop this stupidity and surrender so that we may negotiate.” He reports the thwarting of an attempt on his life by one of Imelda’s bodyguards in a conspiracy involving Enrile and Ramos and then proceeds to present the alleged assassin, Morales, who reads a supposed confession.

Nuns and seminarians of Bandila, a moderate coalition, are the first to form human barricade around Crame. Superstar Nora Aunor arrives at Edsa.

Food starts arriving in response to Enrile’s appeal that while they are ready to die for country, they have no food for the troops.

Mr. President. Your time is up. Do not miscalculate our strength now.”

Kris Aquino, then disco-hopping, is found after a frantic search and reunited with her mother; both are taken to the Carmelite convent in Cebu.

Ver orders power and water lines at Aguinaldo and Crame cut, but he is ignored.

The crowd at Edsa swells.

Officials who withdraw support for Marcos: Lt. Col. Jerry Albano and his security and escort battalion of 200 officers and men.