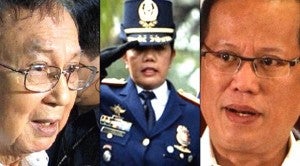 This is an open letter to the President with an appeal for him to ask his senior staff to reexamine the basis for the appointment of police Gen. Lina Castillo Sarmiento as chair of the Human Rights Victims’ Claims Board. It is unfortunate that her credentials do not meet the minimum standards, albeit exacting, set under Republic Act No. 10368, otherwise known as the “Human Rights Victims’ Reparation and Recognition Act of 2013.”

The law requires that the board “shall be composed of nine (9) members who shall possess ‘among other qualifications’ x x x x a deep and thorough understanding and knowledge of human rights and involvement in the efforts against human rights violations committed during the regime of former President Ferdinand E. Marcos.”

General Sarmiento, whatever her qualifications in the field of human rights violations might be today, cannot have any track record of involvement in or understanding or knowledge of the human rights situation during the martial law period.

The solemn mandate of the RA 10368 to provide reparation and recognition to the human rights victims of the Marcos regime is invested with the gravitas of a history forged in the struggle against a dictatorship. After all, RA 10368 is the culmination of our struggle between on the one hand, the quest for truth, justice and on the other, the condoning of rash and remorseless assaults against freedom and human dignity. And the success or failure of the Human Rights Victims’ Claims Board depends upon “the known probity, competence and integrity of its members,” a qualification under the act.

The fundamental proposition of RA 10368 is that the human rights violations were perpetrated by the certain members of the Armed Forces and the defunct Constabulary. The appointment of a general from the uniformed services to preside as chair over the adjudication of the claims for reparation and recognition of the human rights victims is a stinging repudiation of our 15 years of struggle for freedom and democracy, which culminated in the national incandescence at Edsa. It is brazen travesty of the historical legacy of the human rights movement that was integral in the people’s crusade against oppression during the Marcos regime.

Mr. President, in your hands lays the final and real vindication for those who suffered indignities in their fight for freedom, but have been consigned to irrelevance by contemporary history’s tendency toward historical amnesia. We appeal for help to nurture our nation’s sense of history. The unsung heroes deserve the long-overdue recognition of a grateful nation.

Appointment of police general to rights claims board questioned