What, no traffic jam? 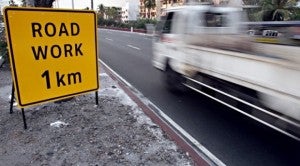 This road sign marked the spot where the construction of the Skyway Stage 3 project started Monday along South Luzon Expressway in Makati City. File photo by GRIG C. MONTEGRANDE

It’s been quite a rocky road for motorists and commuters since the construction of the Skyway Stage 3 project started on Monday.

On Day 1 of the construction of the 14.8-kilometer, six-lane Skyway 3, which is expected to reduce travel time from Buendia to Balintawak from two hours to 20 minutes or less, students and workers were infuriated when traffic came to a standstill at the height of rush hour—and at off-peak hours.

But no one was really stuck in traffic as the government got the show on the road, or so said Malacañang.

The Palace told a different story as it credited the traffic rerouting scheme and surprisingly “compliant” motorists for the relatively moderate traffic flow in the capital since the start of the construction project.

The monstrous traffic jams that have been predicted during the simultaneous construction of major road projects in Metro Manila have yet to materialize, three Cabinet members told President Benigno Aquino III in a meeting Friday at the Palace.

The worst is yet to come, the public is told, as construction of the other major project, the NLEx-SLEx (North and South Luzon Expressways) Connector Road, which follows the same alignment as Skyway Stage 3, gets underway in July this year.

Motorists and commuters are thus advised to brace themselves for an even more hellish traffic gridlock.

“This means that there is ample time to make further adjustments,” Communications Secretary Herminio Coloma said.

Traffic snarls have been expected to be triggered by these two major road projects beginning simultaneously—the Skyway project to connect South Luzon Expressway on Gil Puyat Avenue in Makati City to North Luzon Expressway in Balintawak, Quezon City, and the construction of Naia Expressway Phase 2, which will connect the airport to the Entertainment City gambling hub.

Coloma told reporters that in a meeting yesterday, Mr. Aquino directed the secretaries of the departments of public works, transportation and local government as well as the chair of the Metropolitan Manila Development Authority (MMDA) to “fine-tune mitigation and remedial measures designed to minimize the citizens’ (traffic) inconvenience.”

MMDA Chair Francis Tolentino, delighted with what the government considers better-than-expected traffic flow in and around the cities of Makati and Manila, reported to the President that traffic volume along South Superhighway had been reduced by more than seven percent—or from 131,000 to 122,000 vehicles—daily since the start of construction on Monday evening.

“This shows that affected motorists have begun using alternate routes, adjacent to the construction area,” Tolentino was quoted by Coloma as telling the President.

What he apparently failed to explain to the President was that many motorists coming from the south were using C-5 Highway to avoid the expected gridlock on Osmeña Highway, which straddles both Makati and Manila and Edsa.

Many Metro Manilans were also avoiding Makati and Manila on purpose after the government announced the start of the Skyway 3 construction.

Tolentino’s report is a welcome respite to the Palace, which has been flooded with appeals from motorists and commuters to address the looming monstrous traffic jams.

Overpopulation, lack of discipline, corruption and excessive number of motor vehicles plying Metro Manila’s roads have been blamed for the traffic congestion.

Malacañang’s response is to appeal for a “united sacrifice” during the construction period.

“We renew our call that we share in the burden of sacrifice, and bear with the short-term inconvenience, so we can reap the benefits of faster travel and higher productivity,” Coloma said.

Public Works Secretary Rogelio Singson, for his part, told the President that Edsa, which carries the heaviest volume of motor vehicles, would not undergo any major construction or repair.

“Those using this major artery will not be affected significantly,” Singson said.

“DPWH Secretary Rogelio Singson said efforts will be exerted to ensure that road projects in other areas will be implemented in a manner that will minimize disruption and inconvenience to citizens,” said Coloma.

“These projects will bring about an improved quality of life due to ease of travel across Metro Manila that will benefit the citizens, communities, businesses and industries in Calabarzon (Region IV-A), National Capital Region and Central Luzon, an area that presently contributes about 60 percent of the country’s gross domestic product,” he said.

Coloma said the government was also studying the “road worthiness and safety” of all public utility vehicles such as jeepneys and buses as part of efforts to decongest roads in the capital.

Firms to be affected by Skyway 3, other projects urged to adopt flexitime