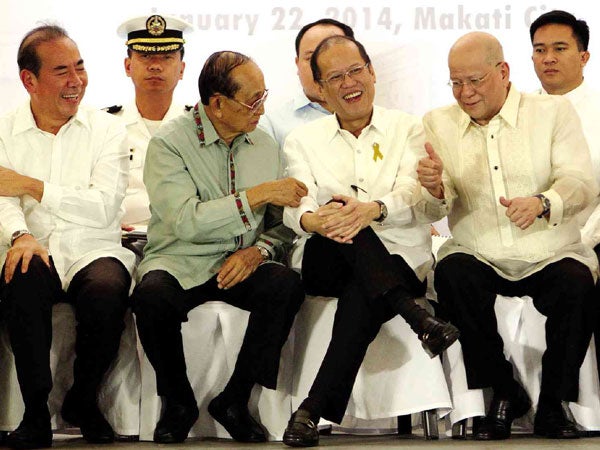 P26B METRO SKYWAY President Aquino (center) laughs as former President Fidel Ramos (second from left) and SMC president Ramon Ang share a joke during the launch of the Metro Manila Skyway project in Makati City on Wednesday. At left is Public Works Secretary Rogelio Singson. Up to 13 road and mass transport projects in the capital are in the pipeline in the next two years, the Metropolitan Manila Development Authority said on Wednesday. LYN RILLON

Up to 13 road and mass transport projects in the capital are in the pipeline in the next two years, the Metropolitan Manila Development Authority (MMDA) said Wednesday as it advised motorists and commuters to brace themselves for continued heavy traffic on major routes till 2016.

Speaking to reporters, MMDA Chair Francis Tolentino said the construction schedules of these projects might overlap and “there will be a point when they will happen simultaneously.”

To prepare for this, the project proponents will meet again on the first week of February to draft a traffic management plan “for the whole metro.” Alternative routes and rerouting schemes will be discussed not just per project but based on their being “interconnected,” Tolentino added.

In the morning session, DoTC representatives presented a plan to start constructing two transport stations in Taguig and Parañaque cities under the Integrated Terminal System starting in the fourth quarter of the year.

Transportation officials also advised the body about the Light Rail Transit 1 North Extension Common Station that would connect the LRT 1 line and the Metro Rail Transit (MRT) in Quezon City. Work starts in July this year and is expected to be finished in September 2015.

The DOTC’s LRT 2 East Extension Project, which will extend the rail line along Marcos Highway from Santolan station to Sumulong Highway, is also expected to be constructed from November this year to June 2016.

Phase I of the project will put a bridge over Pasig River between Sta. Monica Street in Pasig City to Lawton Avenue in Makati City. Phase II will run from Lawton to the BGC Viaduct, then from Shaw Boulevard to the Sta. Monica viaduct.

The DPWH also presented for RDC’s approval a four-lane underpass project on Gil Puyat Avenue (Buendia), which will pass through the intersections of Makati Avenue and Paseo de Roxas. The agency intends to start it this April.

Aside from these projects, Tolentino cited other roadworks ahead:

Construction of the Naia elevated expressway starting this quarter;

Construction of the Edsa-Taft flyover in the last quarter

Construction of the Skyway 3 from Makati to Quezon City, which was launched on Wednesday.

Tolentino said the MMDA would most likely revive its so-called “Christmas lanes” much earlier than the holidays and require the project proponents to deploy their own traffic marshals to assist motorists.

“After these projects, expect traffic to ease up. No pain, no gain,” he said. “By the first quarter of 2016, we will see all these projects in action.”

President Aquino made a similar forecast in a speech during the launch of Skyway 3, which would run from Buendia, Makati City, to Balintawak, Quezon City.

Mr. Aquino said the project would serve as “an alternative highway linking southern and northern Luzon”  and reduce traffic volume on Edsa and other primary roads by about 55,000 vehicles daily.

Building it would employ around 6,000 people and create related jobs or economic activities for at least 10,000 more, he said.

The Metro Manila Skyway Stage 3 is led by San Miguel Corp. and Indonesia’s Citra Group. The latter was also behind the original Skyway project in the southern part of the capital.

Proponents say the 14.8-km, six-lane elevated expressway can cut travel time from Buendia to Balintawak from an hour and a half to only about 15 minutes.

It will start at the end of the existing Skyway Stage 1 on Buendia, run through the length of Osmeña Highway, Quirino Avenue, Paco, Sta. Mesa via the Nagtahan flyovers, through Aurora Boulevard and Araneta Avenue up to Sgt. Rivera Road, and end at the bend of A Bonifacio Avenue toward North Luzon Expressway (NLEx).

Completion is expected in April 2017, though SMC president Ramon Ang as well as Transportation Secretary Joseph Abaya said it could be finished a year ahead of schedule if right of way issues are immediately addressed.

“There is a proposed accelerated plan. Highly critical here is (the acquisition of) right of way,” Abaya said after the program. “If things fall into place and right of way is acquired without problems, then we can get it done by June 2016.”

“Given the state of traffic in Metro Manila, both the public and private sector have been looking for ways to ease the gridlock and we believe that this project is a step in the right direction. The connector road will go a long way in helping solve our traffic problems,” Ang said.

According to Citra, Stage 3 will help decongest not only Edsa but also C-5 Road and streets in central Manila.

Another road project linking NLEx and South Luzon Expressway, which is being pursued by Metro Pacific Investments led by Manuel V. Pangilinan, starts construction in July this year and also targets completion in mid-2016.