Timeline: A day of bloodshed in Kiev | Inquirer News

Timeline: A day of bloodshed in Kiev 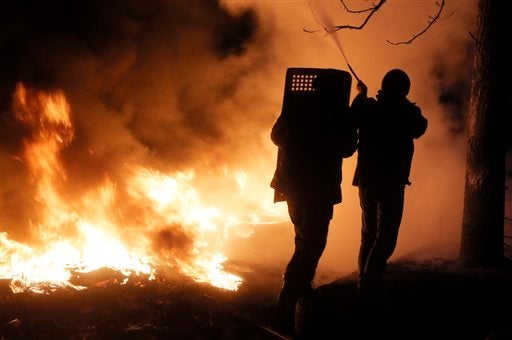 Activists extinguish a tree that caught fire at the burning barricades close to Independence Square, the epicenter of the country’s current unrest, in Kiev, Ukraine, Thursday, Feb. 20, 2014. Fierce clashes between police and protesters in Ukraine’s capital have shattered the brief truce Thursday and an Associated Press reporter has seen dozens bodies laid out on the edge of the protest encampment. AP PHOTO/EFREM LUKATSKY

KIEV, Ukraine—Here is how a bloody day unfolded on Thursday in Ukraine, marked by an escalation of clashes between anti-government protesters and riot police in which the opposition says at least 60 died:

— Toward 0600 GMT (08:00 am local time): Hundreds of armed protesters brandishing sticks, paving stones and petrol bombs charge riot police barricades. They push back the police, who respond with rubber bullets, tear gas and kalashnikovs, to retake control towards 0730 GMT of Kiev’s iconic Independence Square, which they have occupied for the past three months.

— 0900 GMT: After talks with opposition leaders, the foreign ministers of France, Germany and Poland begin a meeting of several hours with Ukrainian President Viktor Yanukovych.

— Toward 1145 GMT: The interior ministry advises Kiev residents not to venture outdoors, where live ammunition is being used.

Kiev’s mayor resigns from Yanukovych’s ruling Regions Party in protest over the “bloodshed.”

— 1200 GMT: During a news conference in Baghdad, Russian Foreign Minister Sergei Lavrov accuses Ukrainian “extremists and hardliners” of seeking to spark a “civil war.” He condemns threatened sanctions against Ukrainian officials as an “attempt at bullying.”

— 1400 GMT: The interior ministry says in a statement police used live munitions in self-defense. Police claim a sniper has wounded 20 officers by firing live ammunition from the window of a building overlooking the square.

— 1440 GMT: The Kremlin announces it is sending a representative to Kiev at the request of Yanukovych to act as a mediator in talks with the opposition.

A medic who works with the opposition says more than 60 protesters died from gunshot wounds on Thursday.

— 1600 GMT: Kiev city authorities say that at least 67 demonstrators have been killed in two waves of violence between protesters and riot police that first broke out on Tuesday.

The White House says it is “outraged” that Ukrainian forces had turned automatic weapons on demonstrators.

— 1630 GMT: The trio of EU foreign ministers and Yanukovych discussed a possible “road map” out of the political turmoil, a German delegation source says, saying the ministers have extended their stay to Friday to continue negotiations.

— 1700 GMT: The EU agrees to impose a travel ban and asset freeze on Ukrainians with “blood on their hands,” Italian Foreign Minister Emma Bonino says after a crisis meeting in Brussels.

— 1930 GMT: No deal has yet been reached to end the violence, opposition leader Vitali Klitschko and a French diplomatic source say, after hours of talks. The three EU envoys are due to meet Yanukovych again imminently.