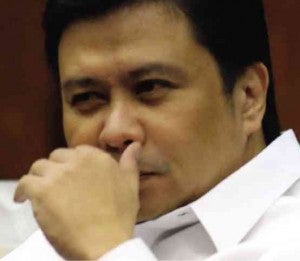 MANILA, Philippines—Sen. Jinggoy Estrada on Thursday confirmed receiving P100 million in project allocations in March 2012 during the impeachment trial of then Chief Justice Renato Corona, but denied knowing that it came from the Aquino administration’s questioned Disbursement Acceleration Program (DAP).

Senators Ferdinand Marcos Jr., Ramon Revilla Jr. and Vicente Sotto III also were said to be beneficiaries of P370 million in additional funding from the DAP that was coursed through state-owned National Livelihood Development Corp. (NLDC), according to official documents made available to the Inquirer.

Marcos stood by his earlier statement that fabricated documents made it appear that he had received DAP funds. He alleged that the fund releases attributed to him might have been maneuvered and released to someone else.

Sotto said he was unaware he had received additional pork barrel funding from the DAP. “I doubt if it’s true,” he said.

Revilla has not returned calls from the Inquirer seeking a comment from him.

Of the four senators, it was only Marcos who voted against Corona’s impeachment.

“I had it checked at my office. I was told that there was but I didn’t know it came from the DAP. What I know is that it should have been taken from the GAA [the General Appropriations Act],” Estrada said in a telephone interview. “I don’t know about the DAP. Isn’t it that I have long been saying that I don’t know anything about the DAP?”

He said he didn’t know how the funds were used or if the money went to the dubious nongovernment organizations (NGOs) controlled by Janet Lim-Napoles, who allegedly channeled P10 billion in lawmakers allocations from the Priority Development Assistance Fund (PDAF) to phantom projects and kickbacks.

Estrada recalled that Budget Secretary Florencio Abad had admitted that 20 senators had received funding from the DAP. “Didn’t he admit that? Now, there’s just the four of us,” he said.

Marcos called the new information linking him to the DAP as a “rehashed” issue. “I did not receive any DAP fund. And if it was indeed a bribe to secure the conviction of Corona, it was illogical for me to be rewarded with DAP funds because I voted to acquit him,” Marcos said in a statement.

He said he had written Magno Oasan, supervising auditor of the Commission of Audit concerning the authenticity of various documents involving NLDC. He said his signature was falsified in documents related to the DAP disbursements to the NLDC.

Marcos said an investigation conducted by his office showed that his signature, which appeared in the NLDC endorsement letter dated 16 March 2012, was falsified and that it did not appear in the “docket system” in his office.

He said the signature of his chief of staff, Ramon B. Cardenas, which appeared in the memorandum of agreements (MOA) to the four NGOs, was also falsified.

Marcos added that the MOAs were of dubious origin because they were allegedly notarized by a certain “Atty. Antonio M. Santos” in Makati City. He said the clerk of court in Makati City had reported that Santos was not a commissioned notary public from 2011 to 2013.

“Considering all these facts, it is reasonable to conclude that some people must have maneuvered the documentation and appropriated the DAP funds themselves,” Marcos said.

Read Next
Timeline: A day of bloodshed in Kiev
EDITORS' PICK
Look Through: The fate of impounded stray dogs
Palace warns sugar hoarders after raid on Pampanga warehouse
What to watch out for when selecting a video surveillance solution
Unleash the photographer in you this World Photography Day with vivo smartphones
House energy committee chair Arroyo bats for cheap electricity
Metro Manila’s COVID-19 cases on downward trend, but surge not over — OCTA
MOST READ
LOOK: Miel Pangilinan dazzles in glittery pre-debut shoot
Man abducted in Batangas gasoline station, found dead in Quezon
August 19 a special non-working holiday in Quezon City
Vice Ganda dismisses rumors he broke up with Ion Perez: ‘Masaya kami’
Don't miss out on the latest news and information.