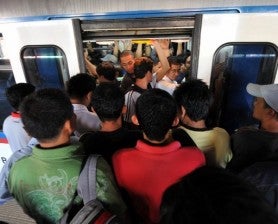 MANILA, Philippines—As part of the government solutions to the anticipated traffic buildup in Metro Manila with the implementation of 15 major construction projects this year, the transport department on Thursday said it would extend the Metro Rail Transit Line 3’s (MRT-3)  operating hours starting next week.

The longer operating hours, which will kick off on Feb. 24, will be done in stages over a four-week period, the Department of Transportation and Communications (DOTC) said in a statement. A decision will be made afterward on whether or not to make the new schedule permanent, it added.

The MRT-3 currently runs from 5:30 a.m. to 10:30 p.m. but congestion, especially during peak hours, means that commuters often have to wait for more than an hour just to get inside the station.

According to the DOTC, “after the four-week testing period, the MRT-3 Office will make its recommendation [to the transportation department] on whether the extended operating hours may be regularized, based on its impact on commuters, daily train maintenance requirements and the additional cost of operation.”

“Our limitations are on maintenance and costs. For maintenance, the coaches have to be checked every night to ensure safety,” DOTC spokesman Michael Sagcal said.

“It seems that we will be able to shorten the turnover process without compromising actual maintenance hours. As for costs, the testing period will allow us to project how much more we need to spend to make it sustainable over time,” he added.

Sagcal said the DOTC was always looking for ways to serve the public better. “We want to deliver convenient, efficient and safe transportation options, especially with the government’s push to improve infrastructure over the next few years,” he stressed.

The DOTC previously announced that the Philippine National Railways would

begin its Special Coach service to ply the Tutuban to Sta. Rosa route as another mitigating step to help ease traffic.

Together with the Light Rail Transit (LRT) Authority, it was also finalizing options through which LRT Lines 1 and 2 could accommodate more travelers who would be affected by the various construction works in Metro Manila.

Meanwhile, the Metropolitan Manila Development Authority (MMDA) said it would be meeting with the Department of Public Works and Highways (DPWH) and DOTC every two weeks to discuss ideas to decongest major roads in the metropolis.

One of the solutions that was taken up during the first meeting on Tuesday, according to MMDA Chairman Francis Tolentino, was allowing cyclists to bring their foldable bikes into the MRT-3.

“The proposal was acted on by Transportation Secretary [Joseph Emilio] Abaya,” Tolentino told reporters, adding that the DOTC also announced its plan to extend both MRT and LRT operations by an hour.

Tolentino said that the DPWH, on the other hand, was working on coming up with additional bicycle lanes to encourage more people to turn to the two-wheelers to get to school or the office.

According to him, the MMDA, DPWH, and DOTC will meet regularly for updates on the traffic situation in Metro Manila.

“The regular meetings show how proactive and focused on finding solutions the government is,” Tolentino said.

Thirteen other government infrastructure projects are also set to be implemented this year.

The MMDA said that the overlapping schedules of the projects would contribute to heavy traffic, particularly in the last quarter of the year. The projected worst-case scenario was that vehicular traffic may end up slowing down to one to nine kilometers per hour on Edsa.

Earlier, Tolentino announced the agency’s plans to hire 400 more traffic enforcers as part of the solutions to help decongest traffic.

At the same time, he appealed for understanding from motorists and commuters, saying that once completed, the projects would benefit them.

While no unusual traffic buildup was observed on Osmeña Highway where two lanes were closed for the Skyway Stage 3 project earlier this week, Tolentino urged private contractors to make full use of the 24/7 construction period allotted to them to ensure that they meet the deadline for the project’s completion.