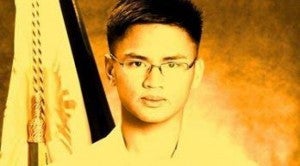 Affirming its strict adherence to the Honor Code on Thursday, the country’s premier military school said that Cadet First Class Aldrin Jeff Cudia was found guilty by his peers of violating it and punished with dismissal, and not for tardiness.

Cudia’s grades would have made him eligible for salutatorian of “Siklab Diwa” Class of 2014, according to his sister, Avee. He is also the recipient of the Philippine Navy saber as the top cadet to join the naval force.

Avee said her brother was judged harshly by the council of cadets when it recommended his dropping from the rolls for lying after he was punished for coming to class late by two minutes.

The class graduation will proceed next month, and its top 10 graduates would keep their ranks, amid a review of the cadets’ decision to dismiss Cudia, the academy’s top officials said here on Thursday.

Armed Forces chief of staff, Gen. Emmanuel Bautista, ordered the PMA superintendent, Maj. Gen. Oscar Lopez, to reopen the case on Wednesday after Cudia’s sister posted an account of the cadet’s troubles in her Facebook.

Lopez enforced a status quo, pending the review of the honor committee’s procedures and its ruling, Maj. Agnes Lynette Flores, the academy’s spokesperson, said on Thursday. This meant that the review would take its proper course and would not be hastened to coincide with the PMA graduation on March 16, she said.

“The PMA does not want to make any mistakes, so the case review will take its own pace,” she said.

In a statement, the PMA said “members of the cadet corps in the Armed Forces of the Philippines (CCAFP) are bound by the Honor Code, which they swore to uphold … . The Honor Code is absolute and it does not distinguish between the degree of the offense committed. Once they lied, cheated, stole or tolerated the commission of these offenses, there is only one punishment—separation.”

It said, “Cadet Cudia’s case is not an issue about being late in class.”

“While it started as a violation of the regulations, which is coming to class late, the findings of the preliminary investigation conducted [by Lopez] revealed a possibility of Cadet Cudia violating the Honor Code, which led to the opening of a formal investigation by the honor committee,” it said.

Sources said Cudia was late for class with three other cadets. While the others admitted fault, he claimed that he was late because the instructor of the previous class had asked him and his classmates to stay behind.

Due to the allegation that he had lied, Cudia faced the Honor Committee, a body made up of nine cadets from fourth to first class (or first to fourth year in civilian schools). The Philippine Daily Inquirer learned that of the nine members of the committee, eight believed that Cudia lied and violated the Honor Code.

“In the academy, Cadet Cudia’s explanation was tantamount to quibbling,” one source said.

“While the academy recognizes his academic performance, this does not exempt him from strict observance of the code,” the PMA statement said. “We are deeply saddened in seeing such great talent go. But the PMA, and the cadet corps, in particular cannot be selective in its application of the code regardless of a cadet’s academic performance and even personal circumstances.”

The academy stressed that “the development of character and integrity among the cadets is a fundamental objective of the PMA, which it attains through the PMA honor code and the honor system.”

It said the honor system “binds the cadet corps with its alumni or the members of the long gray line.”

With Lopez’s status quo order, Cudia’s case would not affect the ranking of the top 10 graduates of the class, Flores said.

The ranking is based on the academic standing and tactical training accomplishments of all 223 graduating cadets, but this could change, pending on the outcome of their mandatory on-the-job training which they are undertaking, according to Flores.

In Arayat town in Pampanga, Cudia’s father, Renato, a former soldier, said he would put his trust in PMA officials who have been studying his son’s case.

Renato declined to talk about the case when the Inquirer reached him, except to describe his son as a good man. “He is kind, God-fearing, diligent in studies and he has a dream,” he said in Kapampangan.

Renato, a commercial diver, and his wife Filipina, also a former soldier, opted to work overseas to raise their family.

Alumni, as well as Baguio families who volunteer for the academy’s foster parent program, said the review of Cudia’s case could become a precedent for other cadets who were discharged because of Honor Code violations.

“Many of us are concerned that the consequence of this review would be the weakening of the Honor Code,” a retired general said in a telephone interview. He agreed to be interviewed on condition that he should not be named.

PMA spokesperson Flores said the review would not disrupt the foundations of the honor system, which guided cadets since the establishment of the academy more than a century ago. “The review would concentrate on the processes taken by the cadets,” she said.

Cudia’s case brought to the fore the military’s honor code system that has been broken in a string of corruption allegations hounding the Armed Forces of the Philippines (AFP) over the past years.

“We are saddened by the allegations and when officers had been found guilty. Expectations are high from the officers who graduated from the PMA and the OCS (Officer Candidate School). All cadets are molded to be upright through the virtues taught to them,” Lt. Col. Ramon Zagala, the AFP public affairs chief, told reporters in Camp Aguinaldo in Manila.

He said the corruption exposés involving AFP officers and men “give all the more reason for us to be strict so that in the future, they (cadets) will not commit these mistakes.”

“Our institutions are built on the honor code. Our objective is to develop officers of integrity. Yes, we could have sympathy for a cadet but the question is between sympathy and integrity,” he said.

“Let’s give him the benefit of the doubt. Maybe he will have new evidence to present,” Zagala said of Cudia’s case.

In a separate interview, Bautista (PMA Class 1981) said he preferred that the matter be resolved by the cadets themselves.

Bautista said he did not give a deadline to the probers, but “they know it is urgent.”

(With a report from Tonette Orejas, Inquirer Central Luzon)