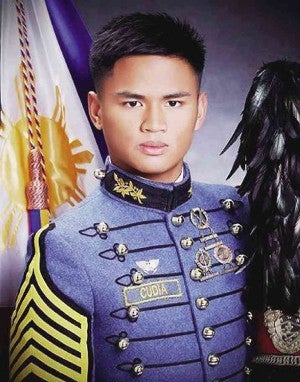 Cudia would have been honored as salutatorian, according to his sister.

The furor over the commencement exercises of PMA “Siklab-Diwa” Class of 2014 on March 16 arose from Avee Cudia’s Facebook post, which circulated on Tuesday. President Aquino will commission the graduating cadets as junior officers of the Armed Forces of the Philippines during the rites.

Avee, in her Facebook post, claimed that her brother, Aldrin, was supposed to graduate as the class salutatorian and the top cadet joining the Philippine Navy.

Aldrin had challenged the demerits he earned for the tardiness, a violation also committed by other cadets in his class, according to his sister’s account.

Avee said Aldrin contested the punishment he drew but lost his case before a council of cadets who believed he had lied.

PMA officials had been informed about the Facebook post, according to Maj. Agnes Lynette Flores, PMA spokesperson. But a statement that was supposed to be issued by the PMA concerning Avee’s post had not been released on Wednesday afternoon.

Bautista “is aware of the clamor of the netizens,” Zagala said. “He wants to make sure that a reinvestigation will find out the truth so that no one can question the decision of the PMA honor committee.”

In her post, Avee claimed that her brother had been detained at a PMA holding center for a month.

“His situation is worse than pork barrel scam suspect Janet Lim-Napoles. He is not allowed visits, not even from the PMA chaplain. The commandant of cadets has announced that he had been discharged, and all because he was tardy for two minutes,” she said in Filipino.

All cadets are required to abide by the honor code, which states, “We, cadets, do not lie, cheat, steal, nor tolerate among us those who do so,” according to the Academy Scribe, the PMA alumni yearbook.

The honor committee is composed of 25 cadets who are convened to address allegations of a cadet’s honor code violation.

A conviction, issued unanimously by the committee members, could compel a cadet to resign or prompt the commandant of cadets to discharge the erring mistah (cadet lingo for classmate or schoolmate).

Aldrin, Avee said, was an accountancy major of Polytechnic University of the Philippines on a scholarship program before he joined the PMA.

She claimed that her brother’s hope was to graduate so he could be eligible and get treatment for their ailing mother at a military hospital.

Avee said the academy’s decision to discharge her brother also affected her mother’s chance of getting healthcare.

Aldrin is not the only graduating cadet to be penalized days before graduation.

A member of the PMA foster parents program said his foster son had been excluded from graduation because he turned his head during final examinations, for which he was accused of cheating.

The foster parent asked not to be named to protect the identity of the discharged cadet. 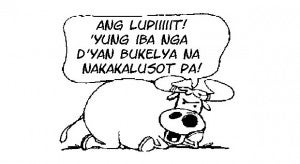 Last year, another cadet was barred from the graduation of “Pudang Kalis” Class of 2013 after he was caught hitting a fellow cadet, according to another foster parent.

“The honor system is very strict, and having passed all their tests does not assure a cadet that he graduates until the commencement exercise itself,” she said.

Avee claimed her brother and his classmates were asked to stay for a couple of minutes by their instructor at the end of his class because the teacher had to hand them some papers.

“Cadet Cudia was slapped with 11 demerit points and 13 hours of touring (cadet lingo for marching in a large square while carrying a drill rifle) as punishment for being late. My brother approached his tactical officer to appeal as it was his right and because his tardiness was not his doing,” Avee said.

When he appeared before the honor committee, Aldrin was asked to explain his tardiness, to which he replied that he was dismissed late, Avee said.

She wrote: “The honor committee, however, concluded that Cadet Cudia was lying because what he should have said was, ‘My professor asked me to wait after class.’ Aren’t the two responses similar?” Because lying is an honor code violation, the committee recommended his dismissal, Avee wrote, ignoring the professor’s affidavit that confirmed Aldrin’s story.

“Is my brother at fault for not being articulate and for not anticipating what the honor committee wanted to hear him say?” she asked.

Avee said she was blaming a tactical instructor for her brother’s predicament, saying Aldrin’s propensity to question or challenge a point might have irritated him.

“What hurts is that none of the top PMA officials conferred with Cadet Cudia, relying instead on the statements of the tactical officer and the honor committee,” Avee said.

The post described Aldrin as one of four people “struggling to be educated because they come from a poor family in Arayat town in Pampanga.”

Avee wrote: “We are students who come to school with empty stomachs because we want to learn and graduate. We come to school with only P20 in our pockets—P12 for our daily fare, P8 to buy candy, so we can’t afford to photocopy a page of a book and are content just copying a whole page by hand.”

Two of their siblings have graduated and passed their licensure examinations, “thanks to parents who sold everything they had, including their wedding rings, just to keep the children in school,” Avee said.

Zagala said the reinvestigation was also meant to bring “closure” to the case and to give both Cudia and the PMA honor committee the chance to prove their case.

“Our appeal to the people is after the reinvestigation, people will accept whatever the decision would be. We will not sacrifice our institutions over a clamor. The reinvestigation will be exhaustive,” he said.

Bautista, however, did not give a deadline to complete the probe, Zagala said.—With a report from Nikko Dizon in Manila

PMA wants to be world-class

Read Next
Gag order issued to PNP probers
EDITORS' PICK
Smart offers wireless fiber-like speeds to Filipino homes with country’s first 5G Prepaid Home WiFi
Legarda: Ending Violence Against Women, a cause for all
This new condo in the South will make you want to turn a new leaf
National COVID-19 vaccination drive gets over 5.3 million people vaxxed so far
Pandemic prognosis: Where does it go from here?
Google won’t accept election ads for 2022 national polls
MOST READ
Bongbong Marcos to face another disqualification case
Christine Bersola, Julius Babao cleared of cancer after colonoscopy, endoscopy
A Merry Bongbong
Pandemic prognosis: Where does it go from here?
Don't miss out on the latest news and information.